Curtis Blaydes says he knows Tom Aspinall is legit but is confident he will get his hand raised on Saturday night in London, England.

After Blaydes knocked out Chris Daukaus and Aspinall submitted Alexander Volkov, he figured he would face the Brit next time out. He knew he still needed a few more wins before getting a title shot so was glad to head to England and face the hometown fighter.

“He’s been very impressive. He’s not your standard big, slow, plodding heavyweight. He throws combinations, he’s athletic, he has a bounce, he’s a respectable opponent, and a win over him is legitimate,” Blaydes said at UFC London media day. “Some guys you beat, you know, I’m way, way, way better, you have no reason to be in the octagon with me. He belongs in the octagon. He’s legit.” 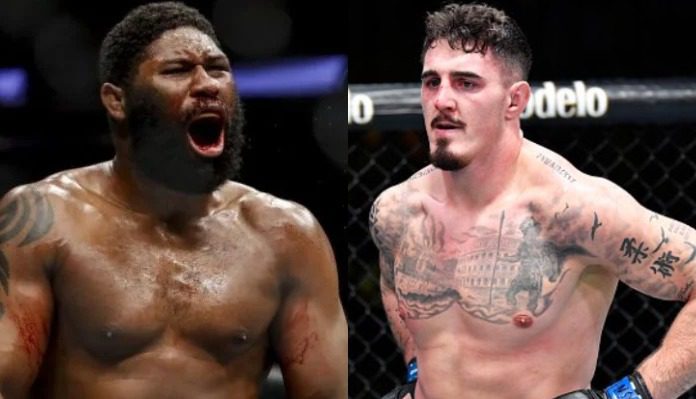 Although Curtis Blaydes believes Tom Aspinall is legit, he just has confidence in his own game to get the win. Should he win, it would be three in a row, however, he believes he’ll need one more win and expects to face the winner of Tai Tuivasa vs. Ciryl Gane which headlines UFC Paris in September.

“A win over Tom puts me waiting for the winner of Ciryl Gane and (Tai Tuivasa). I think we all know that. That’s why the UFC has set up these fights. We knew this back in February when Tom fought, Tuivasa fought, I fought,” Blaydes said. “They were setting this up six months in advance, so I’ll probably get the winner of that fight, and then the winner of that fight will get a title shot.”

Blaydes, as mentioned, is coming off a KO win over Chris Daukaus after beating Jairzinho Rozenstruik by decision.

Do you think Curtis Blaydes will defeat Tom Aspinall in the main event of UFC London?