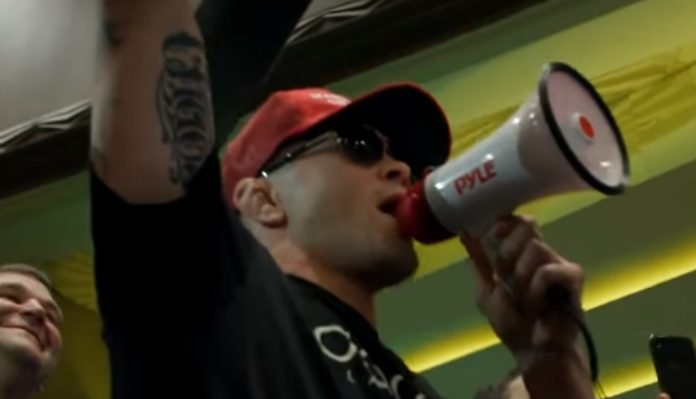 Colby Covington has sent a message to Jorge Masvidal.

On Tuesday, it was revealed the grudge match between Jorge Masvidal and Colby Covington is set to headline UFC 272 on March 5. It’s a highly-anticipated bout as the two are former training partners and roommates but are now bitter rivals. After the fight was announced, Covington was quick to send a message to Masvidal.

Comment from Colby Covington (@ColbyCovMMA) on the Jorge Masvidal (@masvidal) fight, via text:

“He better fucking show up.”

“He better f*****g show up,” Covington said over text to ESPN’s Brett Okamoto after the fight was announced.

This is a fight that has been rumored for quite some time now and recently, “Gamebred” told Covington to accept the fight and not turn it down again. With the fight having been in the talks for months, “Chaos” had offered a bold prediction for his bout against Masvidal.

“He’s just gonna get dumped on his head and knocked the f**k out unconscious. So, what’s that guy gonna do,” Covington said to Submission Radio. “I mean this is the fight that has to happen after he keeps running his mouth. I’m a coward, I’m fragile, I’m this, I’m that, no you’re the b***h. You’re the fragile brittle little b***h, you know. I’m the king of Miami, everybody knows that. I run these streets here. The 305 is mine. I occupy this whole territory. No one can say any different and he knows that.”

Both Colby Covington and Jorge Masvidal are coming off losses to Kamaru Usman for the belt and both men are 0-2 against the champ. With that, the fight between them finally makes sense and will no doubt be a big fight.

Who do you think will win, Colby Covington or Jorge Masvidal?