There is no doubt that the rivalry between Colby Covington and Dustin Poirier still exists and the latest comments that ‘The Diamond’ would “leave the gym crying” just confirms the animosity between the two.

Colby claims he dominated his former teammate while training in the Florida American Top Team gym which brought Poirier to tears, when speaking with MMA News‘ James Lynch he confirmed:

“I used to smack him around so many times in sparring back in the day. I mean, for years, smacking him. He’d literally leave the gym crying. He’d go to Make Brown, just crying, I can’t beat him, why’s his cardio so good, why does he just keep punching me in the face, I can’t do it.”

“I’ve had him literally leaving the gym more time than I can count on both hands. So I’ve already embarrassed him. He knows who daddy is. He knows who the real champ is. He knows who’s better. I wouldn’t care (if I never get to fight Poirier in the Octagon).”

These latest comments from Covington are in addition to previous remarks about Poirier’s wife being a ‘hoe’ and Dustin being a ‘piece of sh*t’ father. Colby has his opinions and certainly doesn’t hold back from airing them. 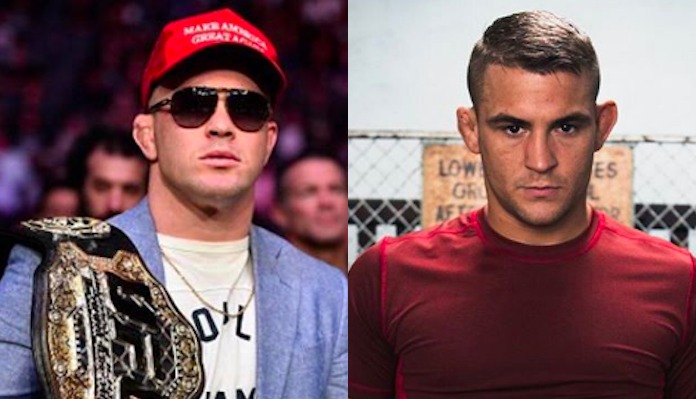 This being said, it wouldn’t be a surprise if Poirier wanted to settle the score with Covington inside the cage. Poirier (28-7 MMA) suffered a third round submission loss to reigning lightweight champion Charles Oliveira (32-8 MMA) earlier this month at UFC 269.

Covington predicted correctly that Poirier would lose to Oliveira prior to the fight. ‘Chaos’ is doing his very best to persuade ‘The Diamond’ to move up a weight class and fight some “real men” at 170 lbs.