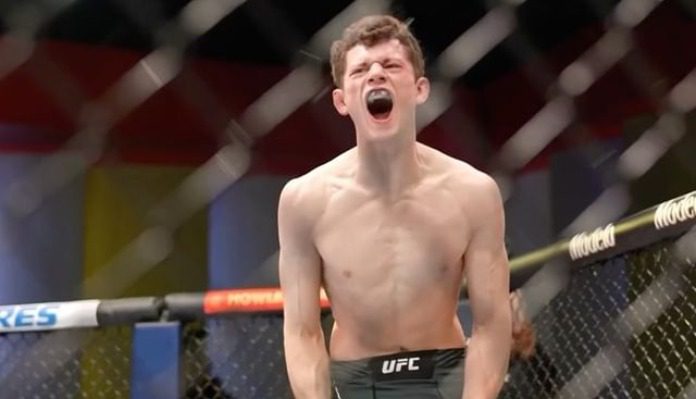 Chase Hooper wanted to prove he belongs in the UFC and believes he did just that.

Hooper was facing Felipe Colares at UFC Vegas 55 as he was looking to return to the win column after dropping a decision to Steven Peterson his last time out. Heading into the fight, Hooper had a ton of confidence in himself and it showed as he got a third-round TKO which he says was the best performance of his career.

“I was trying not to run through too many scenarios in my head and not get too attached to one particular way of winning,” Hooper said to BJPENN.com. “I was prepared to go the full 15 minutes but I was happy I got the finish. It was a good confidence-boosting fight… Not as less chaotic and a lot more measured, I think it was the best overall (performance). I was glad I was able to show my cardio, whether it’s to myself, showing that I can go that crazy high pace for that long. I’m really happy with it for sure.”

Not only does Hooper think that was the best performance of his career, but the featherweight prospect believes he proved to everyone he belongs in the UFC.

“I really am happy with pretty much everything in that fight. There is always stuff to improve on,” Hooper said. “I definitely do feel like I belong now and showed a lot of improvement in myself.”

Although the fight did go into the third round, Chase Hooper didn’t sustain much damage in the fight. However, he says he still wants to take his time getting his next fight but the goal remains on fighting one more time before the year is up.

“I just have a couple of things the doctors want me to get checked out, nothing crazy major,” Hooper said. “But, yeah I want to get another one in before the year ends and start off 2023 early, be on one of those cards. At least another fight this year, we will see what the UFC wants from me.”

When and who Chase Hooper will face next is also uncertain. It also could come at lightweight as he says staying at 145 is something he doesn’t think is a long-term plan so he plans on meeting with the UFC to discuss his next steps.

“I’m going to be heading to the PI to do some of their tests just to see because I do get pretty big walking around without even trying,” Hooper said. “Just seeing whether or not 145 is in my future or how much longer that is going to be there for. Everything is tentative. In the next couple of weeks or so hopefully get that side of stuff figured out. Whatever division I end up in, just build the highlights overall of my career…

“I’m still doing the vegetarian thing to stay at 145, I’m not eating a ton of meat because I feel like that will pack the mass on,” Hooper concluded. “I’m also dieting pretty hard to get to where I need to be for fight week in order to cut the weight to make 145. I had one of the easier weight cuts I’ve ever had as far as the bath and the sauna. I don’t know, I’m really going to ask the folk at the PI and really take whatever they have to stay to heart and take their advice from there.”

Who would you like to see Chase Hooper fight next?