Chael Sonnen has given an unpopular opinion. ‘The Bad Guy’ thinks the UFC should book a trilogy fight between Carla Esparza and Rose Namajunas.

Last Saturday night at UFC 274, fans were witness to arguably the worst title fight in MMA history. Eight years after Esparza and Namajunas had an entertaining fight for the inaugural strawweight title, they had a terrible bout.

Both ‘Cookie Monster’ and ‘Thug Rose’ did little but punch the air for 25 minutes. At the end of the contest, it would be Esparza who claimed the victory by split decision. The win put her 2-0 in the series over Namajunas.

In the aftermath of the fight, Dana White confirmed that the UFC wasn’t going to book a third contest. That’s something that seemingly didn’t sit well with Chael Sonnen. The former UFC fighter discussed the situation on his YouTube channel.

‘The Bad Guy’ correctly noted that Rose Namajunas had given automatic rematches to both Joanna Jedrzejczyk and Weili Zhang in the past. He noted that the fight was terrible, but as a matter of fairness, it would only be correct to give the former champion another shot. 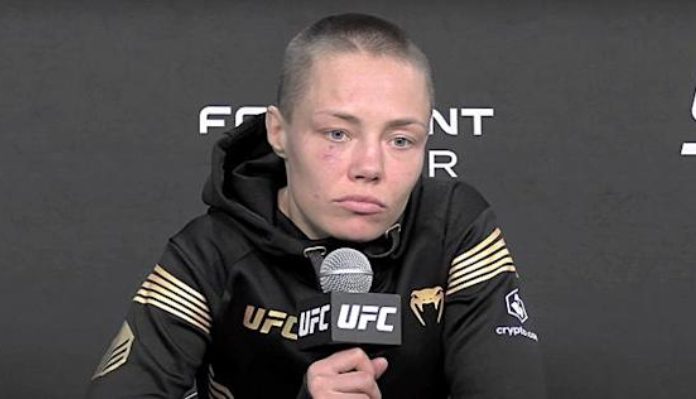 (via MMAWeekly) “We have to redo that match…Rose did this for two other people, she did it for Joanna and she walked out there and did it, and she didn’t have to do it. When Rose beat Weili, it was the second time Rose was put in the position of surprising the world and having to redo it again. That’s a big ask.”

Chael Sonnen continued, “Hey, we got to redo that match. I’m only sharing with you, we want to reap what we sow… In Rose’s case, for her to have done what she already did for not one but two people. If you want to tell me that you don’t want to see Rose and Carla, you cannot tell me you want to see Carla vs. Joanna more.”

What do you think about Chael Sonnen’s comments about Rose Namajunas vs. Carla Esparza?