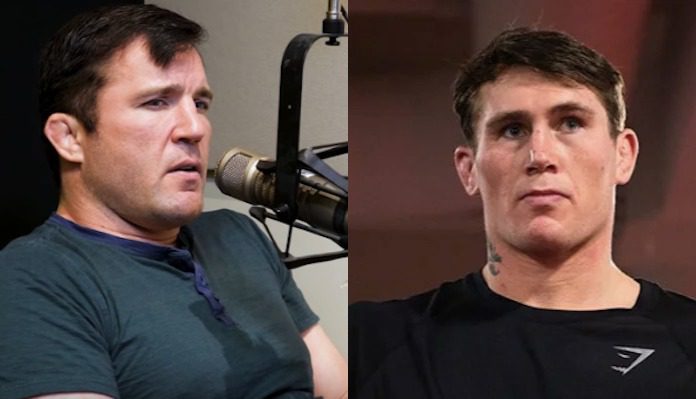 Till (18-4-1 MMA), a former UFC welterweight title challenger, has lost four of his last five fights including two straight in the middleweight division. Now seemingly on the outside of the 185lbs title picture, the Liverpool native admitted that a fight with reigning champion Israel Adesanya is likely a “long way off”.

“Yeah, I feel like Adesanya’s a long way off,” Till said. “I feel like I just got to get a few wins under my belt and prove how good I am to the people again. Obviously, as soon as I get that title fight and win, I know I can beat Adesanya. The sky’s the limit then. The possibilities are endless.

Chael Sonnen recently spoke about Darren Till on a video posted to his YouTube channel ‘Bad Guy Inc‘. The ‘American Gangster’ weighed in on Till’s friendship with Khamzat Chimaev, as well as his aforementioned comments about Israel Adesanya.

“I don’t know where Darren Till’s mind is at right now. I know that he’s doing all of the right things. I know from a marketing standpoint this friendship he’s got with (Khamzat) Chimaev, this is the most unlikely duo that you can’t quit watching. It’s very interesting. Then you’ve got (Michael) Bisping telling stories, and these guys are shopping together and documenting the whole thing. Like it’s really fun. Till is in a really good place. Till’s training has got to be great. We know the stuff that they are doing out in Sweden. We know the sacrifices that Till is going through. I am trusting that you guys follow this stuff online and when they put out these different things on YouTube. I do.”

Chael Sonnen continued on Darren Till:

“So we know that he is sacrificing, we know that he wants to get better and specifically with Chimaev, that seems to be an offering to the missing piece of Darren Till’s game. So at least, in theory, we are checking a lot of boxes. But then I tell you I don’t know where Darren Till is at mentally. If somebody ever goes through you. Not just you get beat but somebody goes through you. You weren’t ultra competitive. Psychologically you will question yourself. At least in the short term. At least for the next fight and maybe couple of fights. To make sure you’ve done what is needed to close that gap. So it would be very normal if Darren Till is living with those questions right now. Till just did an interview that had to do with Izzy Adesanya. Now when people talk to Till, they talk to him like a star. The questions keep coming back like a main eventer. The questions he’s getting asked are what you would ask a champion or a main eventer or a number one contender. All of which Till was. And Till for the first time ever gave a response that lacked confidence. The response to Adesanya was ‘that fight is a long ways away but’, he finished with something – I don’t need to hear anything else. I do not have to hear anything else. It’s the first time Till has ever spoke and shown a weakness. And it is relevant. I think he’s questioning himself. That’s all I am saying. It is not a big deal. It would be very normal if he was.”

Do you agree with Chael Sonnen that Darren Till’s recent comments about Israel Adesanya are a show of weakness?