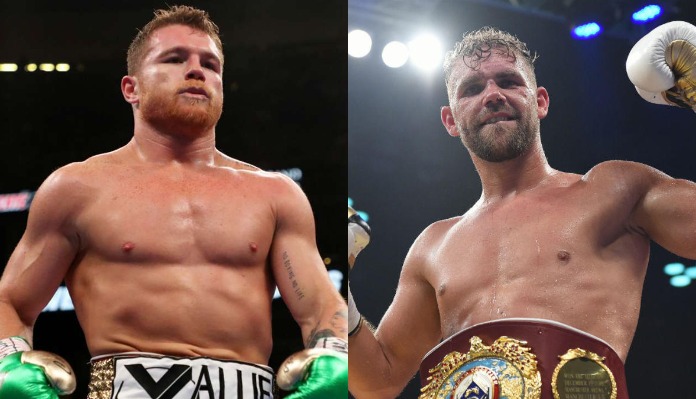 Canelo Alvarez and Billy Joe Saunders will no longer be fighting on Saturday night according to Tom Saunders, the father of Billy Joe.

Alvarez and Saunders were set to fight at AT&T Stadium in a unification bout of the super-middleweight titles. It was a highly-anticipated fight as Saunders was considered to be Alvarez’s toughest test, but unfortunately, just days away it has been revealed the fight is off. It is due to a ring size dispute as Alvarez put in an 18-foot ring, while most fights are in a 24-foot ring which was a problem for Saunders.

“I can’t say they are coming face-to-face. The issue with the ring has still not been sorted. There is nothing in the contract about ring size, it is all negotiations and the negotiations have broken down big time,” Tom Saunders revealed to IFL TV about Billy Joe’s fight against Alvarez. “Basically, Canelo has put an 18-foot ring which I think is an amateur ring, that’s the fight ring. His plan was to put an 18-foot ring because Canelo Alvarez knew we were gonna start, and he said a 20-foot ring that’s it. His game plan was to put a 20-foot ring, we wanted a 24-foot ring, we came down to a 22-foot ring, but basically what they are trying to do is take Billy Joe’s legs away. We are up against everything here, everything.

“At the end of the day, I’m not going to let my son box in a 20-foot ring against supposed to be the pound-for-pound king of boxing,” Saunders continued about Billy Joe vs. Canelo Alvarez. “We are up against everything here and we spoke to them this morning and they said it’s either 20-feet or book your flights home. Unfortunately, people, we apologize to all the fans, British, American, and around the world. I just can’t let my son box in a 20-foot ring against Canelo Alvarez on Cinco de Mayo weekend. We have given in to a lot of stuff here but this we can just not give into. They are trying to take his legs away, the fight would not be fair.”

According to Tom Saunders, he believes this proves Canelo Alvarez never wanted to fight his son in Billy Joe Saunders. He thinks this was the plan all along so it looks like Saunders is the one backing out.

However, Team Saunders has made it clear they are not fighting in a 20-foot ring and they are planning to fly back to England. They have also told fans to get a refund for their ticket and they apologize to the boxing world for this, but Alvarez and Eddie Hearn are set on a 20-foot ring.

“Fights off, the fights off. I mean, the negotiations broke down completely,” Saunders concluded. “It’s basically book your flights, pay for your own flights, and F off.”

What do you make of Canelo Alvarez vs. Billy Joe Saunders being off?