It was on Saturday, October 22nd at the Etihad Arena in Abu Dhabi, that Aljamain Sterling (22-3 MMA) met up with T.J. Dillashaw (18-5 MMA) in the co-main bantamweight event.  ‘Funk Master’ won the fight and the title that night.

It was following the loss, that Dillashaw revealed that he had been dealing with shoulder issues during his training camp but still believed he could compete and beat Sterling at UFC 280.

In speaking to ‘MMA Fighting‘, Sterling had this to say about T.J. Dillashaw:

“He legitimately came into this fight and went through his training camp thinking I was going to be an easy fight with one arm or one arm that compromised in terms of grappling. If he either took a shot and I sprawled, his shoulder would have came out the socket or if he posted on his arm, it would come out the socket.”

“So for him to go through a training camp, either the guys he’s training with, he’s kicking their asses and they’re kind of booty and they gave him a false sense of security but those guys he’s training with are not Aljamain Sterling, they’re not Merab Dvalishvill so for him to really think that he was going to run through me, it’s a testament to his arrogance that I touched on going into this fight and a testament to the delusional world that he still lives in that he thinks the competition is the same.”

Sterling went on to say that Dillashaw obviously discounted him as an opponent saying:

“That’s his fault. For him to come in thinking ‘I got through training camp like this before,’ which I also did — albeit those fights weren’t UFC caliber opponents because those fights were at the beginning of my career. My first seven fights before I got my shoulder surgery, the same thing happened in training. I still took the risk to get in the fights and luckily they went my way but had I lost, I couldn’t come out and say ‘well my shoulder!’ It wasn’t an issue all these other fights but now it’s an issue?”

“So to try and discredit me and not just be a man about it like the better man won today. Leave it at that. I got my ass kicked for half of the fight with Petr Yan and I said the better man showed up today and did his job. Unfortunately, he made a mistake and gave me a chance to do it over but he was on his way to winning the fight. Took it on the chin, took it like a man, took my ass whooping like a man as well. When he comes out and says s**t like that it’s like you had the built-in excuse the entire time.” 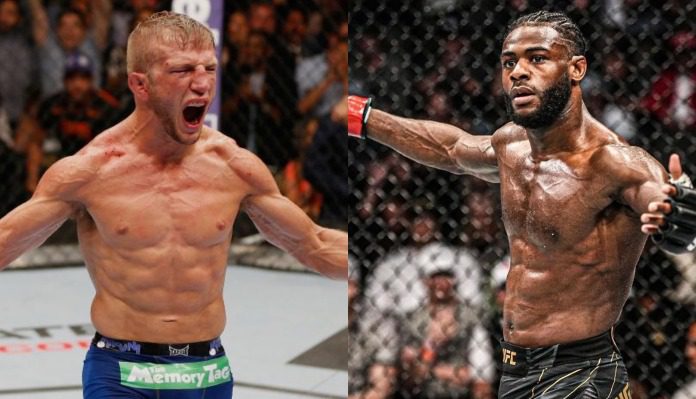 When asked if there could by a Sterling vs Dillashaw II in the future, the 33-year-old said:

“I would gladly run it back and kick his ass again and double down. If that’s what he really wants. I’m telling you, we were so dialed in and no two fights are the same, but I guarantee you, we will end up grappling at some point again, and if we do, if I take him down, and he ends up in a similar position where his butt hits the mat and he gives me an opportunity to advance to either his back or to solidify control from the top position, he’s going to end up in the exact same position and it’s going to be déjà vu and he would be taking another ass whooping all over again, which honestly doesn’t need to happen but if that’s what he wants.”

Sterling concluded by saying a re-match with Dillashaw would be ‘easy money’:

“If I’m being honest, it would be me saying easy money. I think I would have all the confidence in the world for a much more levelheaded reasoning why I could go into a rematch and go ‘easy money.’ Literally easy money. It’s no disrespect to him but I don’t think he’s the same guy as he was before and I think my skill set, my size and my strength is just going to overpower him.”

“So, 37 years old, going to have to do another year long (layoff with surgery) cause this is going to be his second one on his shoulder. If we fight again, it’s only going to be worse. That’s where I’m at.”

Would you like to see a Sterling vs Dillashaw II? Do you agree with the champion that is would be an easy fight & easy win?

This article appeared first on BJPENN.COM
Previous articleAnthony Smith believes Jake Paul did the Nate Diaz – Anderson Silva thing backwards: “You also have to be able to convince people that there’s an opportunity for Jake Paul to lose”
Next articleExclusive: Founder Jon Nutt will feature in 1 vs 2 bout at Fight Circus IV: Send Lawyers, Guns and Money
© Newspaper WordPress Theme by TagDiv