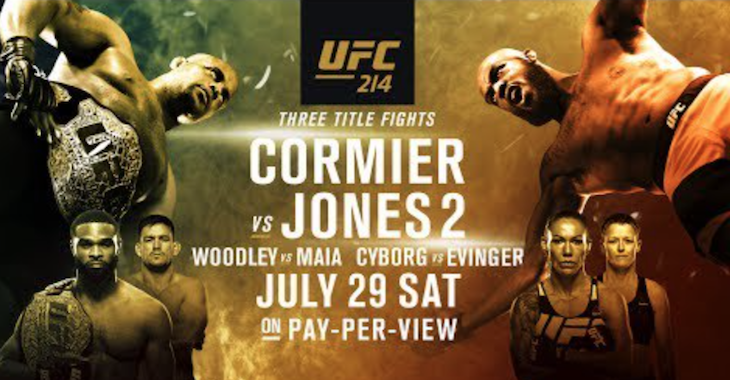 Friday morning in Anaheim, California, the fighters of UFC 214 hit the scales ahead of their highly anticipated showdowns on Saturday night. Thankfully, all championship fighters hit their marks for the event, and all three title fights are now official for Saturday July 29th.

In the main event, Jon Jones and Daniel Cormier will step into the Octagon for a highly anticipated showdown that will see Cormier look to avenge his rather one-sided 2015 loss to Jones. On the flip-side, Jones will be looking to return to the Octagon after nearly a year and a half away, and reclaim the title he never lost inside the Octagon.

In the co-main event, UFC welterweight champion Tyron Woodley will look to defend his welterweight title against Demian Maia, while Maia of course will be looking to utilize his spectacular JiuJitsu to dethrone the champ.

In the third title fight of the night, former Invicta FC champions Cris Cyborg and Tonya Evinger will step into the Octagon together to fight for the vacant women’s featherweight title. The fight marks the first time Cyborg will compete in the UFC at 145 pounds, which she successfully weighed-in at this morning.

I just made 145 for the first time under the CSAC weight cutting reform. It has been a great experience so far and will save fighters lives.

Of course, stay tuned for the full ceremonial weigh-ins later in the day, where the fighters will hit the stage in front of a massive audience.