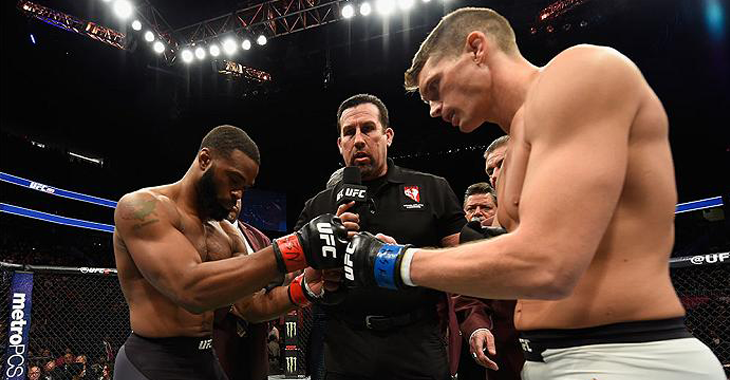 UFC welterweight champion Tyron Woodley and top ranked welterweight contender Stephen Thompson have been into the Octagon together twice. In both fights, the sraps were regarded as being rather lackluster, with the first fight even going to a draw.

While Wonderboy has been absent from the Octagon since the pair’s second scrap, he has made it clear that he intends to fight his way back to title contention, something Tyron Woodley believes will be all but impossible.

“He’s gonna have to walk on water for him to get another shot at me. He had two opportunities, and not many people get a second chance. He had two opportunities to show that he was the better fighter, and in both cases, I felt he didn’t show that. It just doesn’t make a ton of sense, to be honest. That’s like Joseph Benavidez getting another crack at Demetrious Johnson. Are a lot of fans going to be tuning in for that? To answer your question, there’s not a really clear-cut contender right now. What they have to do is shuffle the deck. Obviously, my shoulder is an issue, but that gives time for these guys to compete with each other and let a true No. 1 contender emerge.”

With Woodley recently making his successful title defense against Demian Maia, the welterweight division is wide open for another contender to emerge, including possibly Jorge Masvidal, who recently lost his title eliminator fight against Demian Maia. Woodley spoke about Masvidal’s chances of a title fight, saying: “What Jorge is doing is the respectful way. Jorge is in a position to actually fight for a title. Had he not lost the split-decision—which was a very close fight—to the guy I just shut out, he would’ve been fighting for the title, so I have no issue at all with him campaigning for a title shot. I have no issue with the way he’s going about it. His goal should be to fight for a title. As you saw when I fought Robbie Lawler, sometimes you have to fight a teammate or a friend if it comes down to UFC gold. I respect Jorge a great deal.”