UFC middleweight Trevin Giles will return to the Octagon in November, his first fight back since recently fainting at a UFC Las Vegas event.

Giles was set to fight Kevin Holland at UFC Fight Night: Brunson vs. Shahbazyan earlier this month. However, while making the walk to the Octagon, Giles fainted and the fight was called off on the advice of doctors. It was a scary incident and Giles was sent to the hospital for further tests on his heart. He recently posted videos of himself training so it appears that Giles is now OK despite the recent health scare.

Incredibly, just a few weeks after the fainting spell Giles has now announced his return to the Octagon. The UFC middleweight based out of Houston, Texas, took to his social media on Thursday to post a photo of his bout agreement against Bevon Lewis at the UFC Fight Night card on November 7. Take a look at the photo Giles posted below on his Instagram stories. 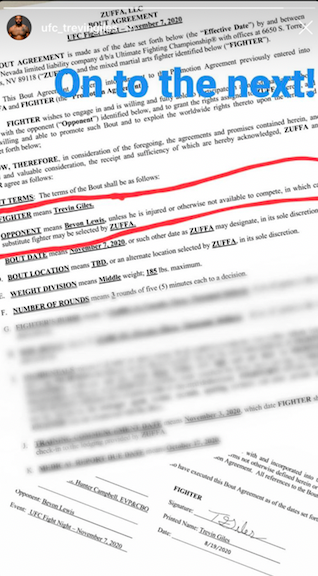 Giles (12-2) holds a 3-2 record in the UFC with wins over James Krause, Antonio Braga Neto, and James Bochnovic, and losses to Gerald Meerschaert and Zak Cummings. The 28-year-old American works as a police officer in Houston but is a very good middleweight despite not being a full-time fighter. In Giles’ last fight at UFC 247 in February, he was able to win a split decision in a controversial bout that won “Fight of the Night.”

Lewis (7-2) had tons of hype on him coming off of Dana White’s Contender Series but so far he has been disappointing inside the Octagon. After losing to Uriah Hall and Darren Stewart in his first two UFC fights he was finally able to pick up a win in the Octagon over Dequan Townsend in his last fight. He is still a solid prospect and a win here over Giles would be a big confidence booster for him.

Who do you think wins, Trevin Giles or Bevon Lewis?