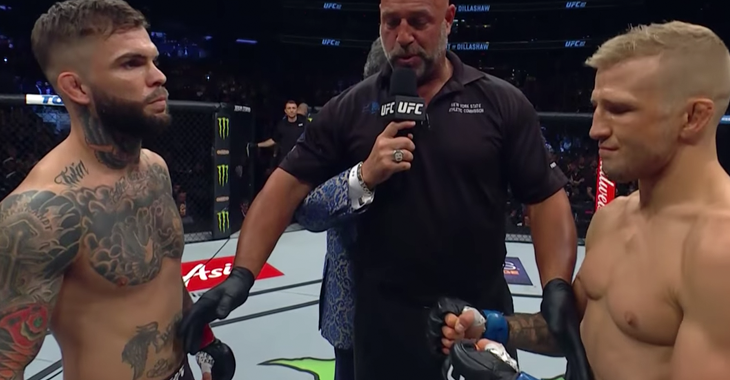 The UFC 217 aftermath continues to lay out. After receiving a new contract today, a fight has come along with it for UFC bantamweight champion, TJ Dillashaw.

After reports from BJPenn.com’s own Chris Taylor of negotiations taking place for a super fight between Dillashaw and flyweight champion, Demetrious Johnson going down, they would eventually fizzle out. This led to the likelihood of a Dillashaw vs Cody Garbrandt rematch.

After an initial report from TalkMMA, ESPN would report that the rematch has been finalized for UFC 227 on August 4th in Los Angeles.

By now, everyone knows about the Dillashaw vs Garbrandt/Team Alpha Male rivalry. Which would eventually come to a conclusion at UFC 217 after a season of The Ultimate Fighter where the two coached opposite one another.

Garbrandt was the champion, Dillashaw the former looking to reclaim after losing to Dominick Cruz.

Initially, the two were set to settle the score at UFC 213 but Garbrandt would have to pull out due to a back injury that pushed the fight back from July to November.

Once the two finally met, they didn’t disappoint. After being saved by the bell in round one after a late knock down, Dillashaw would recover between rounds and end up knocking out Garbrandt in the second.

For Garbrandt, that was the first loss of his professional career and with this immediate rematch, it makes him the first former champion with no title defenses to get an instant rematch after losing via finish.

Do you think the UFC is setting this rematch up to quickly? Who do you think will win?