After pulling one of the biggest upsets in MMA history, Larissa Pacheco is ready to do it again.

The Brazilian is fresh off her trilogy with Kayla Harrison at PFL 10 last Friday. The pair headlined the promotion’s first foray into pay-per-view, something the Judoka wasn’t happy with. Heading into the third matchup, Harrison was a massive favorite, despite Pacheco riding a five-fight knockout streak.

After all, it was hard to blame oddsmakers. The Olympian had won all eight rounds against Pacheco previously and was expected to dominate once again. Instead, the Brazilian flipped the script on her and pulled off one of the biggest upsets ever.

Larissa Pacheco wound up winning by unanimous decision, winning PFL’s 2022 women’s lightweight tournament. Prior to the final bout, Kayla Harrison announced her plans to leave the tournament format. That’s not something the Brazilian would be happy with, as she revealed in an interview with MMAJunkie.

There, the newly crowned PFL champion called for a fourth fight with Harrison. Pacheco desperately wants the fourth matchup due to the Judoka currently leading in the series. However, if the Brazilian gets her way, she won’t be for long. 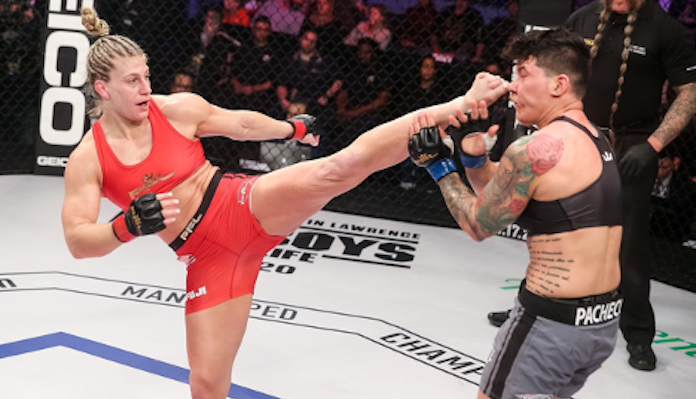 “I was pretty confident,” Pacheco stated “I didn’t know if it was going to be over the five rounds or if I was going to get a knockout. Of course, Kayla is a very good fighter. It was a great fight. But I was really confident that I would come out with the win.” (h/t MMAJunkie)

She continued, “We’re going to sit down with the team. I think it’s inevitable that we’ll fight again. I want to fight the best, I want to show I’m one of the best. I think the fight’s going to have to happen again.”

“I want to stay at this weight, I represent this weight very well. I think there are other good girls out there. I don’t see why we have to change a division when we already have a new champion. I hope to keep on fighting right at this weight. We need [more fights]. She’s winning 2-1. I need to tie her and then beat her.”

What do you make of these comments? Do you want to see the fourth fight? Sound off in the comment section below PENN Nation!

This article appeared first on BJPENN.COM
Previous articleBelal Muhammad doesn’t think Kamaru Usman should get an immediate rematch against Leon Edwards: “If you want to make this a real sport”
Next articleHouston Alexander “would love to take a crack” at boxing Jake or Logan Paul: “I have a ton of respect for them”
© Newspaper WordPress Theme by TagDiv