When Evolve’s Amir Khan heard news that he would be re-entering the ONE Lightweight World Grand Prix, replacing the injured Ariel Sexton in the semi-finals against Saygid Guseyn Arslanaliev, he was already training for would-be opponent Iurie Lupicus.

Khan, who was submitted by Sexton in the quarter-final round, had already bowed out of the tournament. With this turn of events however, the 24-year-old Singaporean finds himself once again in the thick of the lightweight title picture.

“I’m pretty excited about it. I was already scheduled for 17 May against a different opponent, so I’m in shape.” Khan explained “ONE Championship told me Ariel Sexton got injured, he broke his [arm], but they offered me a fight against ‘Dagi’ to get back into the Grand Prix.”

Despite being re-inserted into the tournament, Khan definitely has his work cut out for him. Arslanaliev is a monster, and with Eddie Alvarez’ exit from the ladder, is now arguably the favorite to win it all. 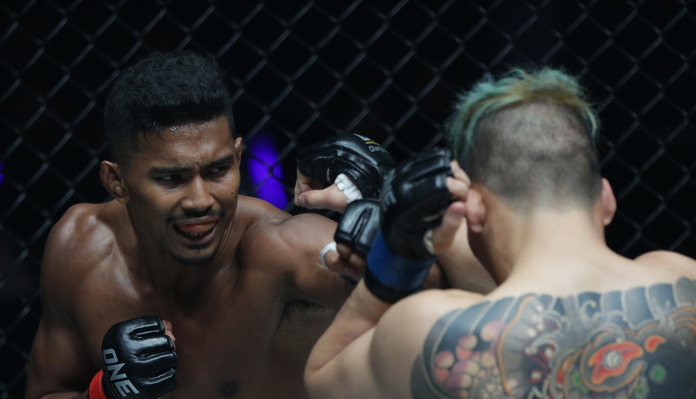 The Turkish beast is currently riding a 3-bout winning streak, with exciting finishes over Tetsuya Yamada, Ev Ting, and Timofey Nastyukhin. He’s won all of his bouts by thrilling finish.

Yet Khan believes he will get past this test, because he is the more skilled martial artist.

“I would say it’s more technical now. We are more technical as a whole team, and we break down our individual weaknesses. The last time we just trained in general – just sessions where everyone trained [techniques] whether you were good at them or not,” says Khan

If Khan defeats Arslanaliev, he will have booked himself a slot in the ONE Lightweight World Grand Prix finals. The other bracket features a bout between Nastyukhin and American standout Lowen Tynanes.

Khan says a victory over Arslanaliev would put the rest of the division on notice.

“I think it’s huge. It will just put me up there. He’s already beaten good guys so beating him will put me up there as one of the best,” Khan concluded.

“If I beat ‘Dagi,’ then I deserve a place in the World Grand Prix.”

Do you think we’ll see Amir Khan in the ONE Lightweight World Grand Prix finals?