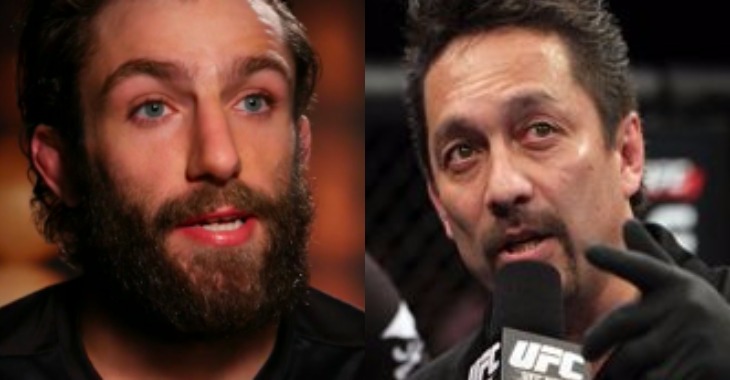 On June 25, the UFC touched down in Oklahoma City, Oklahoma with UFC Fight Night 112. In the main event, Kevin Lee and Michael Chiesa went to war in a compelling clash of lightweight contenders. Unfortunately this main event was shrouded in controversy, as Lee locked up a first-round rear-naked choke, but referee Mario Yamasaki stopped the action before Chiesa actually tapped.

Since then, Yamasaki has defended his stoppage, while the Oklahoma State Athletic Commission (OSAC) has denied Chiesa’s appeal. Despite this, Chiesa still feels he was shorted, and is harboring quite a bit of resentment against Yamasaki. On Monday’s edition of the MMA Hour, the lightweight even challenged the referee to a September 30 grappling match.

“I would like to test his fifth degree black belt in a friendly grappling match and let’s see if he’s what he says he is,” Chiesa told Ariel Helwani. “And I’m not saying it in a hostile way, I’m saying, ‘hey, if you’re a fifth degree black belt, you should back up for the decisions you made.’ As a martial artist myself, that’s my open challenge to him, to headline Onnit Invitational on Sept. 30.”

Yamasaki has already replied to Chiesa’s callout. Rather unsurprisingly, the 53-year-old referee is not especially interested in obliging it.

“I’m 53 years old, I don’t train anymore, how am I going to do this?” Yamasaki told MMAFighting.com. “And what’s the point of him fighting me? What would that change? What does he want to prove? It’s childish. Even if he catches me or if I catch him, that won’t change anything that happened in his fight. What is he trying to prove?”

“If he gives me some time to train, I’d grapple with him,” he continued. “Tell him to come to my academy, no problem. I have 10 academies in the United States, he can come any time he wants.”

“What is he trying to prove? That’s what I wanna know,” the referee concluded. “What would that change? He wants media [attention], and he already had media.”

What do you think of Michael Chiesa’s beef with Mario Yamasaki?