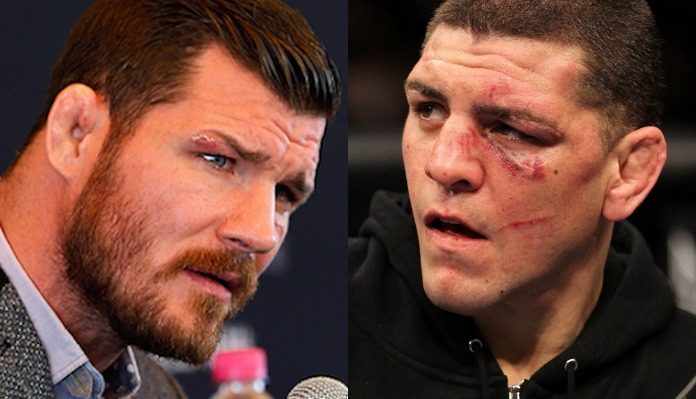 The rumors about a potential showdown between former UFC middleweight champ Michael Bisping and long-absent Strikeforce welterweight champ Nick Diaz are just that — rumors. On a recent episode of his podcast Believe You Me, Bisping shut down these undeniably dubious rumors, referring to them as “total bullshit.”

“No, no. I’m not fighting Nick Diaz, it’s all total bullshit,” Bisping said (transcribed by Jim Edwards for MMANytt). I haven’t spoken to the UFC about anything, they haven’t even come to me. In fact, I’m a little bit offended the Ultimate Fighting Championship — what the fuck?”

While there have been no real negotiations surrounding a fight between Bisping and the elder Diaz brother, the pair have apparently spoken about a potential scrap in the past — but only in passing.

“So here’s the deal with Nick Diaz,” Bisping said, recounting their brief chat about a possible fight. “A while ago I was in New York. I was doing some PR stuff for the UFC and I went to a club, actually, with a friend of mine, couple of friends and lo and behold – there was Nick Diaz.

“Great guy, we hung out, we had some drinks, we had a good time and he suggested that we should fight each other at 170m” Bisping continued. “And I’m like ‘I can’t do 170, so we were talking about a catchweight and I said ‘Nick, I’d love to, man. You’ve got a huge name in this sport,’ you know? It was a very pleasant conversation. There was no nastiness, you know what I mean? There was no bitching. I was like ‘come on dude, you have to come up, making 185 kills me’ and this and that.”

“But really I think we were just having fun with it more than anything. It never materialized into any actual real discussion of a fight, and of course since then he got banned or suspended – that whole thing with the weed which was ridiculous, absolutely ridiculous. Fortunately, the commission did the right thing and he’s back. But I don’t know were these rumors started, I don’t know who started it but it’s bullshit. I haven’t heard a single thing. The UFC haven’t reached out, my management haven’t reached out – no one has said anything, no word what so ever.”

So there you have it. Those who reported rumors of a Michael Bisping vs. Nick Diaz fight were purely peddling fake news.