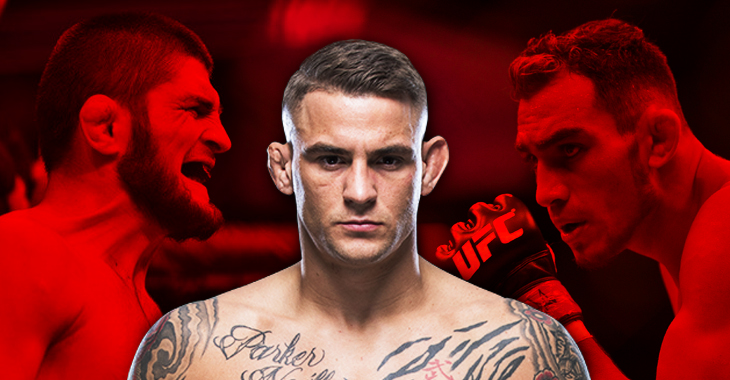 April seems too far away to wait for the highly anticipated clash between Khabib Nurmagomedov and Tony Ferguson at UFC 223. This will be the fourth that these elite lightweights have been expected to fight each other. Somehow, they both keep getting ripped apart and put back together again. That’s why it’s no surprise that Nurmagomedov’s manager Ali Abdel-Aziz has a contingency plan in place on the chance that something unfortunate happens again. This plan he has in mind would also make one particular lightweight very, very happy.

“I did not want Tony Ferguson to become the champ, I want him to be the interim champion because fight night, if Tony got hurt then Khabib [Nurmagomeodv] still fights for the undisputed lightweight championship. But if Tony Ferguson is the champ, then Khabib has to fight a regular fight. Now, I’m not trying to give myself a credit as a smart guy, but any manager in my position should think of that. ‘Oh, let’s make Tony Ferguson the champ and Khabib fight him,’ but what happens if Tony got hurt? Khabib’s going to be 30 – 0 with no belt? This is why regardless – if Tony got hurt or Khabib got hurt – it’s a belt on the line. Doesn’t matter. 100-percent [someone will fight for the title].

“What I didn’t want is Tony become the champ, and gets hurt fight week, and Khabib fights somebody as the co-main event. And I brought it up [to UFC], Conor [McGregor] can come back if Khabib got hurt. Respect it or not, Conor is two-time champion. He beat two very good guys. They’re very smart. Fight week they’ll probably make an announcement. If they strip him now, fight week is normal. But if they strip him fight week, how big would the news be? […] I think they’ll bring a guy like [Dustin] Poirier [in if Ferguson or Khabib pulls out]. If Justin [Gaethje] would have won, 100-percent they’d bring in Justin, but Justin is coming off a loss. I think Poirier, they’ll bring him up and he deserves it. When a guy is willing to fight, you have to give him the best fight.” — Nurmagomedov’s manager Ali Abdel-Aziz speaking to MMA Junkie Radio.

While we’ve got every finger and toe crossed that both Khabib Nurmagomedov and Tony Ferguson make it to UFC 223, props to Abdel-Aziz for thinking ahead. It’s hard to think that Dustin Poirier wouldn’t pass up the shot. He’s scheduled to fight Justin Gaethje just a week later, but it wouldn’t be the first time the UFC pulls from close events to fill in for another fighter. Jose Aldo was pulled from his 12/16 fight with Ricardo Lamas at UFC Winnipeg to fight Max Holloway at UFC 218 on 12/2 when Frankie Edgar couldn’t make it to the cage.