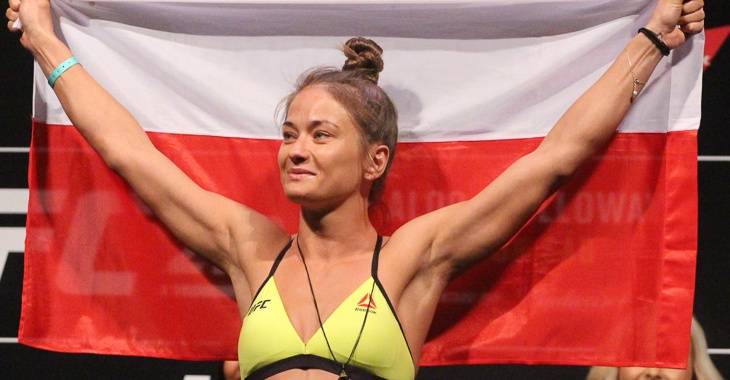 Only one woman has gone the distance with both the UFC Strawweight champion, Rose Namajunas and the former champion, Joanna Jedrzejczyk…and that’s Karolina Kowalkiewicz. Kowalkiewicz earned her first and only UFC title shot by defeating Namajunas by split decision at UFC 201 in July of 2016. This led to her taking on the then champion, Joanna at the big, inaugural UFC New York card, UFC 205. Unfortunately for Kowalkiewicz she would drop a unanimous decision to the champion then go on to lose to Claudia Gadelha before regaining another win this past October.

Being so familiar with both, Kowalkiewicz obviously has an opinion. When asked by MMARocks her thoughts on the upcoming Rose vs Joanna rematch at UFC 223 and who she thought would win, this is what she had to say:

“It’s tough to say, but I think Rose will keep the belt. Personally, I really like Rose. I really value her, not only as an athlete but as a person. People will hate me for not crossing fingers for my countrywoman, but let’s not lie to ourselves. Joanna is insulting me in every possible interview. I’m not going to say that I cross my fingers for her just because she’s my countrywoman. I won’t cross my fingers for her. I like Rose more. I think Joanna is just a bad person.”

In the fourth round of Joanna and Kowalkiewicz’ UFC 205 title fight, Kowalkiewicz hurt Joanna worse than we had ever seen before. Some assumed this may have given fellow Strawweights some glimmers of hope if they came up against the champion. Whether or not that was true, Rose was able to seal the deal when she got the chance.

Coincidentally, Kowalkiewicz’ next fight will also be at UFC 223 on April 7th when she takes on the streaking, Felice Herrig. Herrig currently rides a four-fight win streak and a win over one of 115’s best in Kowalkiewicz will put her even closer to a title shot. Especially when the title is on the line that same night.