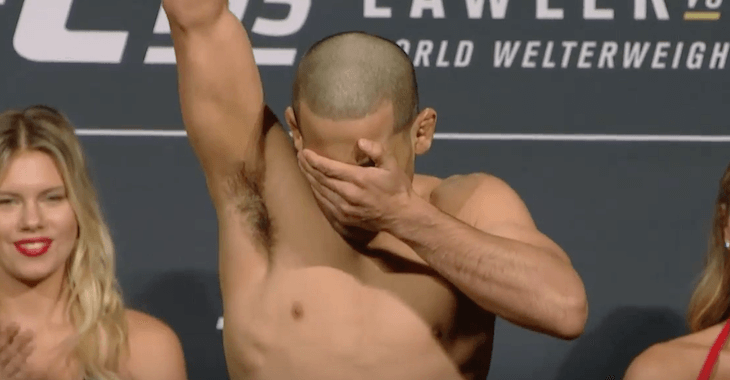 On Saturday night, the UFC returned to sun soaked Mexico City, Mexico, for the first time since June of 2015. The highlight of 13-fight card was undoubtedly the main event which saw streaking lightweight contender Tony Ferguson best former champion Rafael Dos Anjos in an epic, five-round battle. That, of course, was not the only memorable moment of the event.

Another highlight of the event occured on the preliminary card, when UFC bantamweight Joe Soto took the fourth short-notice fight of his five-fight UFC career, stepping up for a 140-catchweight bout with Mexico’s Marco Beltran on less than two weeks’s notice. Despite the brevity of his training camp, Soto performed extremely well in this hastily arranged encounter, winning the fight with a heel hook at the 1:37 mark or round 1.

Had the fight lasted much longer, however, things might have gone quite differently for Soto. Not only would he probably have been punished by the high altitude of Mexico City, but he also probably would have felt the effects of a brutal weight cut down to 140 lbs.

In a recent interview with MMAJunkie.com, Soto detailed the brutal cut he endured for this last-minute bout with Beltran – a cut he calls the worst of his career.

“I had [to lose] 24 pounds in five days,” Soto told MMAjunkie after his win in Mexico City. “It was a lot. It was the toughest cut of my life. I didn’t think I could do it, and I almost didn’t. It took a lot out of me. But after I got through that, I could do well in the fight.

“It took my team,” the bantamweight continued. “They were picking me up off the floor and throwing me in the sauna. They were helping me the whole way. I was falling asleep because I didn’t sleep the night before. They shaved my head. They shaved all the hair off my body.”

With this brutal weight cut in the rear-view, Soto has but one hope for his next fight: he doesn’t care who it’s against, or where it takes place, he just wants a full training camp.

Do you think the UFC should allow massive weight cuts like Soto’s? Sound off, PENN Nation!