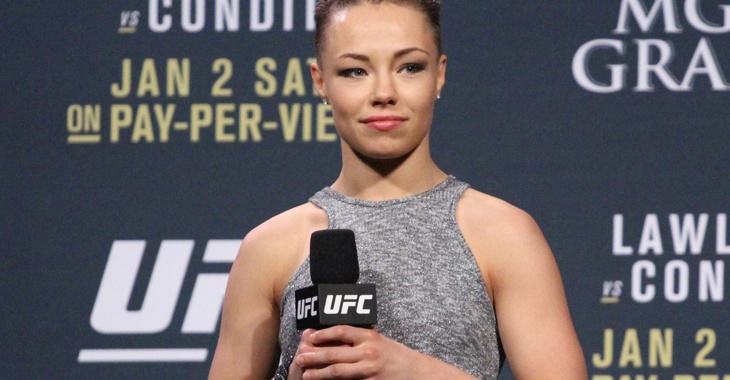 Back in November, Rose Namajunas ended the incredible strawweight title reign of Joanna Jedrzejczyk in the most emphatic way possible, stealing her belt with a first-round knockout.

Shortly thereafter, it was revealed that the formerly dominant Jedrzejczyk would receive an immediate rematch, and the chance to reclaim her title. This rematch co-headlines UFC 223 this Saturday night in Brooklyn.

Ahead of this rematch, Namajunas spoke to FloCombat, explaining that she feels her very presence in the strawweight division rattles the former champ.

“I think that I took [Jedrzejczyk’s intimidation] away from her the minute she knew about me, even before the fight,” Namajunas said. “I think she’s been psyching herself out just by the presence of myself, ever since I’ve been on the scene. I’ve just been freaking her out ever since I’ve been around. I don’t think that’s going to change with this fight.”

While Namajunas understands her rematch with Jedrzejczyk could be very different from their first fight, she feels the stars are aligning for another dominant win, and possibly a dominant reign as UFC strawweight champ.

“We’re constantly improving my game,” she said. “My reactions, my reflexes, physically and mentally, it seems like everything is perfect right now for me to be a dominant champion.”

“I don’t know what’s going to happen [in this rematch],” she added later. “All I know is I’m going to punch her in the face, take her back, and choke her out.”

Prior to her loss to Namajunas, Joanna Jedrzejczyk went 14-0 as a pro mixed martial artist. Her five most recent wins were all strawweight title defenses, as she thwarted Jessica Penne, Valerie Letourneau, Claudia Gadelha, Karolina Kowalkiewicz and Jessica Andrade. She’s 14-1 overall.

Rose Namajunas, meanwhile, preceded her win over Jedrzejczyk with a second round submission of former Invicta champ Michelle Waterson. She’s 7-3 in sum.