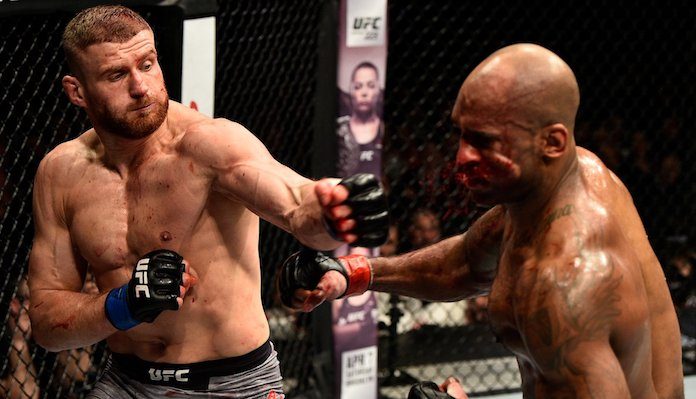 In the co-main event of last night’s UFC London card, Polish light heavyweight Jan Blachowicz avenged a 2015 decision loss to Jimi Manuwa, capturing a unanimous decision win over his British rival in the card’s Fight of of the Night. Although the UFC has yet to update its official rankings, this win is likely to propel Blachowicz to the uppermost reaches of the light heavyweight top-15.

While Blachowicz suggested post-fight that he would happily give Manuwa a tie-breaking rematch, he later added that he’s also interested in a showdown with PRIDE legend and former UFC light heavyweight champion Mauricio “Shogun” Rua.

”He was a monster,” Blachowicz said at the UFC London post-fight press conference. “Jimi is a very tough guy and very dangerous. My dream was always to fight against Shogun, so maybe him, but the UFC will choose.

As Blachowicz implies in this comment, this is not the first time he’s called for a bout with Shogun. The Polish contender also called the Brazilian legend out after his October 2017 submission defeat of Devin Clark.

With his defeat of Manuwa, Blachowicz improved his current streak to three straight, as he’s also recently bested Jared Cannonier and Clark. He’s now 22-7 overall and 5-4 in the UFC.

Third win in a row. Worked really hard for it! Thank you All for your support! #won #ufclondon

Does a fight between Jan Blachowicz and Mauricio “Shogun” Rua work for you, or would you prefer to see the Polish contender rematch Jimi Manuwa? Make your pick in the comments section below.