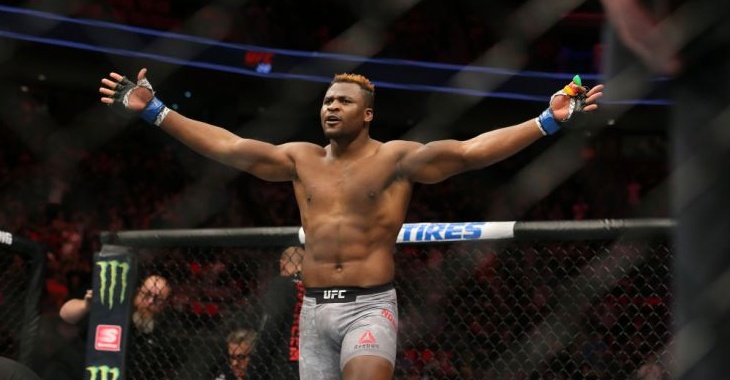 Everyone is starting to know who Francis Ngannou is. Which is fair…he hasn’t been making it very easy to go unnoticed, especially after the way he knocked out Alistair Overeem at UFC 218. With that win now under his belt, the 31-year-old, Cameroonian, Ngannou has himself set up for the biggest fight of his life when he takes on the heavyweight champion, Stipe Miocic at UFC 220. The shockingly powerful striker is more than focused on the task at hand, but that doesn’t mean he isn’t looking into the future after Saturday night is over. He shared who he wants next on the Outside the Cage podcast:

“I will get through the Stipe fight first but my dream was to become the boxing world champion. So whenever the opportunity [to fight Anthony Joshua] will be there, we will see. I’m open for that but right now Stipe is the goal.”

Other than a cross-over boxing vs MMA super fight…Ngannou also said he has a lot of interest in facing a very popular retired former champion.

“As a challenger, I want to fight some people because that will give me the opportunity to get to the title shot. Then as a champion, I think i’m going to let them come and show them i’m the king. But also I think the fight I would really like to see is Ngannou vs Brock Lesnar.

[Lesnar] seems like a very powerful guy and I want to test him.”

Anthony Joshua and Brock Lesnar are both currently with different sports as Joshua is the current heavyweight king in the boxing world and the former UFC heavyweight champion, Lesnar is with the WWE and is their current Universal champion. With that in mind, Ngannou is certainly shooting for the stars with how he wants to leave a legacy. But that all depends on if he can get through Stipe Miocic this Saturday at UFC 220.