The rematch between former UFC heavyweight champs Fabricio Werdum and Cain Velasquez appears to be set for the UFC’s annual end of the year card, according to Werdum’s coach Rafael Cordiero.

“Beniel Dariush is representing our team on 5 November in Mexico City and Werdum on December 30 in Vegas against Cain Velasquez. Go with everything!”, wrote Kings MMA head coach Rafael Cordeiro.

Although their first fight was only a year ago at UFC 188, both men will enter the rematch under very different circumstances with a common victory over Travis Browne.

Werdum defeated Browne in a rematch of their 2013 fight by three round decision, ending the bout with a bizarre dust-up with Browne’s coach Edmond Tarvedyan.

Velasquez’s last win was also over ‘Hapa’, but under far more violent circumstances. The former heavyweight champ mauled Browne in their UFC 200 contest, ending the fight by TKO in the first round.

But prior to Werdum’s rematch with Browne, ‘Vai Cavalo’ lost the belt he earned by beating Velasquez after Stipe Miocic brutally knocked him out, ending his reign as champion before Werdum could ever successfully defend the title. 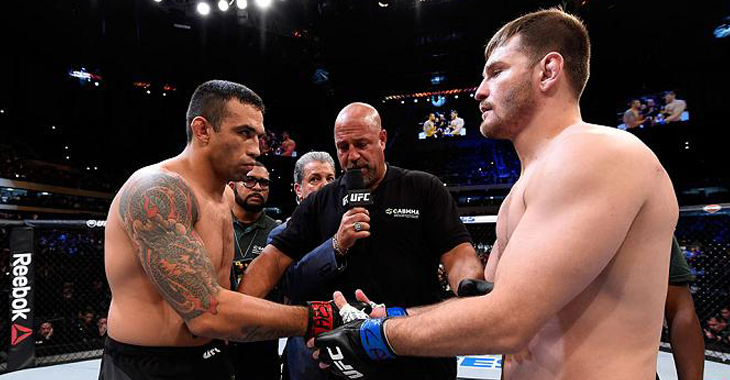 With Alistair Overeem out of the picture following his UFC 203 KO loss to Miocic, a victory for either man could easily propel them back into title contention.

Who do you have in the rematch between Werdum and Velasquez? Will Cain avenge his submission loss to ‘Vai Cavalo’? Or will Werdum once again beat Velasquez and work his way back to the belt? Sound off, PENN Nation!