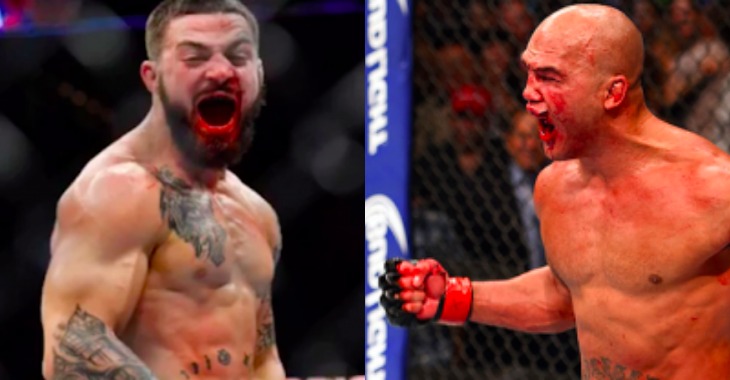 Last weekend, in the co-main event of the UFC’s latest trip to Pittsburgh, brick-fisted welterweight “Platinum” Mike Perry picked up a thunderous knee-induced KO win over Alex Reyes, who stepped in to replace Thiago Alves on short notice. Shortly after this win, Perry made an exciting callout of former UFC welterweight king and fellow knockout artist Robbie Lawler.

On the latest episode of BJ Penn Radio Mike Perry explained the reason for this callout of Lawler.

“I was like, I’m going to fuck this dude up, then call out Robbie Lawler, cause he’s number one,” Perry said. “Number one and the champ know – and the top-10 too, of course, I’m against the whole division – I’ll fight any one of them, just like they would say they’d fight any one of us. But we all know that my chances of hitting somebody in the head and wobbling them are much greater than anybody else’s in the UFC. What do I have, the third highest knockdown rating in UFC history right now? Per minute – third highest per minute in UFC history.”

“I think he fights,” Perry said of Lawler. “I think he’d show up and stand in the middle and punch me in my face, or at least try, just like I’m going to do to him.”

While this a fight Perry would love, a chat with his managers has him believing it probably won’t happen just yet.

“Not right now,” he said of his desired showdown with Lawler. “It doesn’t look like that fight is going to come to fruition right now. That’s understandable. I have more work to do. But I let [the UFC] know – I’m letting everybody know, and I think they understand now – that this ranking system, and whoever has the belt, to me, does not matter. They know I will pick up the phone. If asked, I will say yes. So whomever, whenever. They need me to be there, [I’ll] sign on the dotted line, show up, be like a true professional, handle my business, and just keep climbing the ranks. In due time, it’s inevitable for me.”

Do you want to see Mike Perry and Robbie Lawler fight?