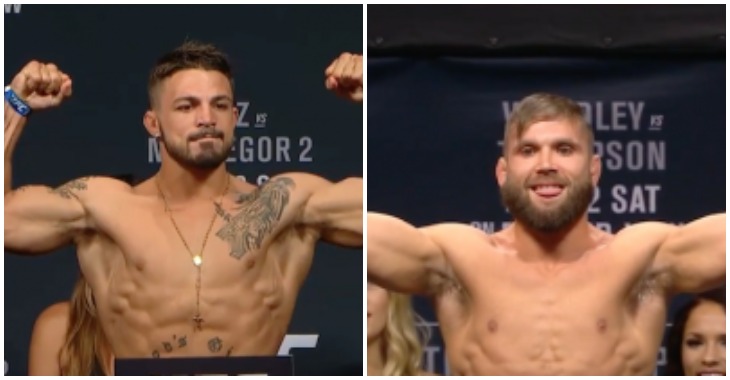 Over the weekend, the UFC flew more than 400 of its fighters out to Las Vegas for a special, athletes retreat. This retreat has generated quite a few headlines over the last few days – and very few of them have been positive. Mike Perry, however, had an amazing time participating.

While Perry’s review of the retreat is overwhelming positive, however, he did have one slightly negative experience when he ran into UFC featherweight Jeremy Stephens. Apparently, things got tense enough that Perry pushed Stephens onto the ground. Perry recounted the run-in in an interview with BJPenn.com’s Chris Taylor.

“I pushed Jeremy Stephens to the ground,” he said. “We were at the Snoop Dogg concert. Cris ‘Cyborg’ had punched that one girl in the face on the second day. On the first night, they got between a couple of fighters, but they didn’t even touch each other. But then Jeremy Stephens tried to dance up on my girl, and he knew it was my girl. It was at the end of the night. Snoop had already come out, and I had been killing it, dancing with my girl all night. Jeremy Stephens walks up on her, and mid hip-thrust, as he was about to maybe make contact with her body, I pushed that mother fucker hard as I could, double-hand to his chest, and he fell on the ground. He was mad as hell but he didn’t do shit.”

“He was trying to be a dick, but he’s 145 pounds, he doesn’t want these problems,” Perry continued. “Who the fuck is that guy, bro?”

What do you think of this story from Mike Perry?