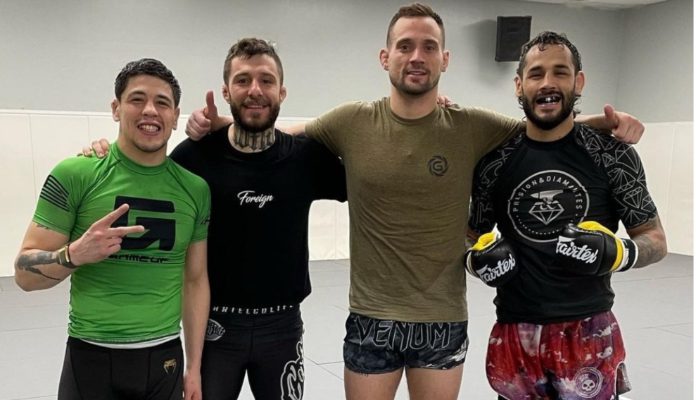 Brandon Moreno will have a new head coach in his corner at UFC 277 and it will be James Krause.

Moreno has spent the majority of his career at Entram Gym, including having them in his corner when he won UFC gold. Yet, he revealed he needed a change and decided to go to Glory MMA and train under Krause.

“We have the same manager and he was obviously looking to make a move and my name got thrown around a couple of times,” Krause said on Just Scrap Radio on BJPENN.com about Moreno training there. “I think if you ask Brandon this, he will tell you that during COVID he was commentating quite a bit and he saw I was there almost every weekend. We had trained together a few times in Vegas and had some good chemistry and just kind of clicked. I told him my thoughts on his game and things he could improve on.

“Then, we were initially going to fight Figgy (Deiveson Figueiredo) so that was the rematch,” Krause continued. “In comes Kai Kara-France and they already fought and I’ll be honest I haven’t even really watched the fight in terms of game planning, I haven’t referenced it a ton because I think they are completely different fighters.”

As Krause says, the expectation was to prepare for Deiveson Figueiredo but he will now game plan for Kai Kara-France. Although the two met UFC 245 with Moreno winning by decision, James Krause believes the rematch is much different.

Along with that, Krause believes Moreno has gotten a lot better since training under him and he thinks the Mexican is a bad style matchup for Kara-France.

“I think it is a lot different, Kai has a lot of confidence and has obviously improved his game. I think he is much more well-rounded than he used to be, I don’t think he is a stellar grappler but his anti-grappling is at an elite level,” James Krause said about Moreno’s fight. “We saw what he did to Askar Askarov in terms of anti-grappling to keep it on the feet. When I look at these guys stylistically, I think Brandon historically has made some mistakes, and I don’t want to dive into what they were but we have fixed a lot of those…

“As far as the stylistic matchup goes, I just don’t think there are many people that are going to beat Brandon after the changes he made and that includes Figgy. Obviously, I’m biased, but I think it will take someone a little bit more well-rounded than Kai to get him out of there. It’s really difficult for me to see Kai beating Brandon over the course of 25 minutes, it’s difficult for me to see Brandon losing three rounds to him,” Krause continued about Moreno’s fight. “If Brandon does get him down there will be big problems, I’m not saying it will be easy but if it does, there will be big problems. To disrespect what kai is doing right now is so stupid, we are looking at this like he is an elite level because he is and we are taking this very seriously.”

Not only is this a big fight for Brandon Moreno as he looks to become the interim flyweight champ, but it is a big one for James Krause. The coach is 0-2 in UFC title fights – Tim Elliott vs. Demetrious Johnson and Megan Anderson vs. Amanda Nunes – which is frustrating for him. His goal has always been to coach a UFC champion and he believes that happens on July 30 at UFC 277.

Do you think Brandon Moreno will beat Kai Kara-France at UFC 277?