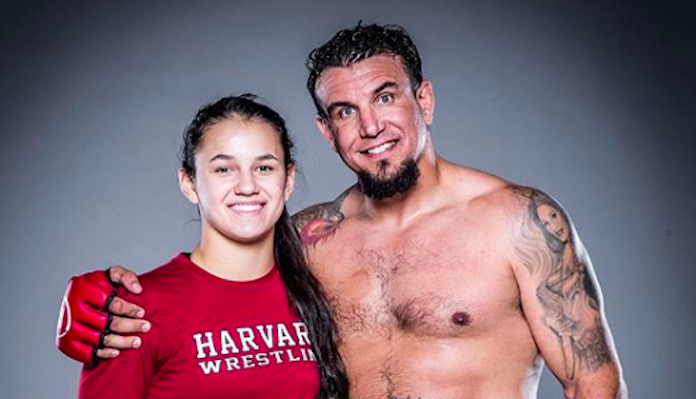 Frank Mir believes his daughter Bella has all the capabilities to be one of the best fighters ever.

Bella is 2-0 as a pro and at just 18-years-old has shown some promise. According to Frank Mir, he says he tried to talk his daughter out of being a fighter due to how little fighters make. However, after some time, he liked the idea of her following in his footsteps and after two wins, Mir is confident she has what it takes to be a world champion one day.

“It’s beautiful to watch your child do something they love and get recognition for it and be successful. I’m happy about that,” Frank Mir said on Just Scrap Radio on BJPENN.com. “Obviously, being a professional fighter, it’s not the injuries that scare me, it’s making a living out of it. You are not working on your business during a fight career so you are putting all your eggs in one basket. That’s scary to me because of the financial payback, there is a lot of luck involved.

“You might blow your knee out before a big fight, you might get caught and that was your chance for a title shot,” Mir continued. “Like Conor McGregor doesn’t have the accolades that Demetrious Johnson as pure as a mixed martial artist, like Johnson, is the better fighter. But, who makes more money? It’s not even close, it’s not even in the same ballpark. That’s the scary part because financial security is not easy. She wants to do it, so I’m either going to sit on the sidelines or be a part of it and try to make sure she can be the best she can be.”

According to Frank Mir, he says he’s giving Bella a ton of advice and doesn’t want her to rush getting to the UFC. He is well aware she will have a ton of people calling her out because of her last name. But, Mir knows she has to take her time and develop her skills to reach her full potential.

“Right now, there are a lot of people saying let’s go to the UFC right now and as a father, I’m putting on the brakes,” Mir said. “Let’s not get ahead of herself. She’s talented, tough, smart, she has everything going and she checks off every box to be a world champion, a Hall of Famer. Anyone getting in there too soon is not good.”

Not only is Frank Mir excited for Bella’s MMA career, but he says his career goal is to have his retirement fight on the same card as his daughter. He believes it would be a symbolic moment of him passing the torch onto his daughter.

“One of my ambitions I have said and I would really like to stick to it, is I would like to fight on the same card as my daughter,” Mir said. “That would be a great father-daughter experience and how many people can say they’ve done that in their career? Compete as an athlete on the same playing field as their child. It would be a moment of passing the torch of the ending of my career and the starting of her career. I would have to make it an MMA fight to make that happen.”

What do you make of these comments from Frank Mir about Bella?