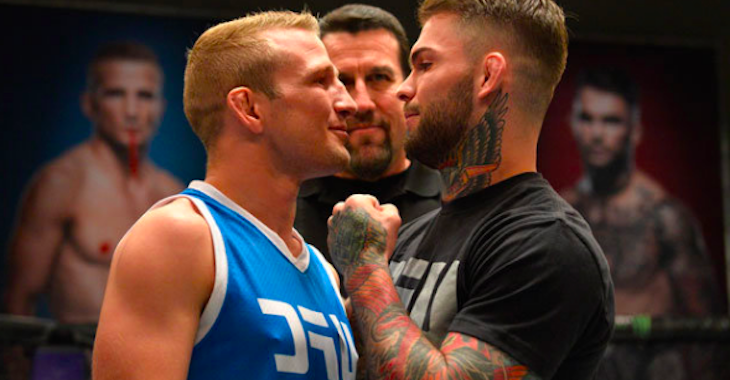 T.J. Dillashaw fires back at Cody Garbrandt “You can’t even really be called champ without defending your belt”.

While “Mighty Mouse” is expected to be out of action until at least April after undergoing successful shoulder surgery, Dillashaw is using the downtime to perfect his cut to 125-pounds.

The now two-time UFC bantamweight champion of the world, T.J. Dillashaw recently sat down with BJ Penn Radio to discuss the science behind his move to flyweight.

“I’m fighting Demetrious Johnson, the pound-for-pound best in the world, so if I’m gonna go out there and prove to them I’m the best fighter, I’ve gotta give myself the best chance and that’s to make the weight the right way, very scientifically and be on top of my game.

When Cody Garbrandt caught wind of Dillashaw’s plan and that it could keep him from defending his bantamweight title for some time, he immediately put TJ on blast. Dillashaw responded to his former teammate turned bitter rival by stating the following.

“He’s reaching. It’s what he does, it’s what he’s done the entire time. He’s reaching trying to make himself relevant. He was saying that he could make the weight within a month and that’s exactly what I’m saying. He’s an idiot. Yeah, you could make the weight in a month, but you’re not gonna feel very good. Me, especially. I walk around lean, I’m on a good diet, I’m on a great lifestyle year round. I can definitely make the weight. When I was told I was going to be fighting Demetrious the summer of last year, I was told I was gonna be fighting him in August, I was waking up at 154 at the time and within three weeks of me thinking I was fighting Demetrious, I was waking up at 140 and that was a little bit fast tracked, but I like to do it even smarter than that, but I was already waking up at 140 pounds.”

Dillashaw believes that Garbrandt has a tough road ahead of him if he wants to eventually score a rematch.

“Man, he’s got a tough road ahead of him. He’s got some guys in the weight class that are going to definitely challenge him. We’ll see if he can get through them. I think he was a little hyped up. He had a great fight against Cruz. He’s a great fighter, very fast, very explosive and powerful, but just ahead of him, so we’ll see. I feel like he’s gotta earn his spot. I lost a split decision victory to Dominick Cruz where, not only me, but the UFC thought I won that fight and it took me two years to get that fight back, you know what I mean. It’s one of those things where I had to work my way back. Had to beat two number one contenders to get my shot.”

Do you think we will eventually see a rematch between bitter rivals T.J Dillashaw and Cody Garbradnt? Sound off PENN Nation1