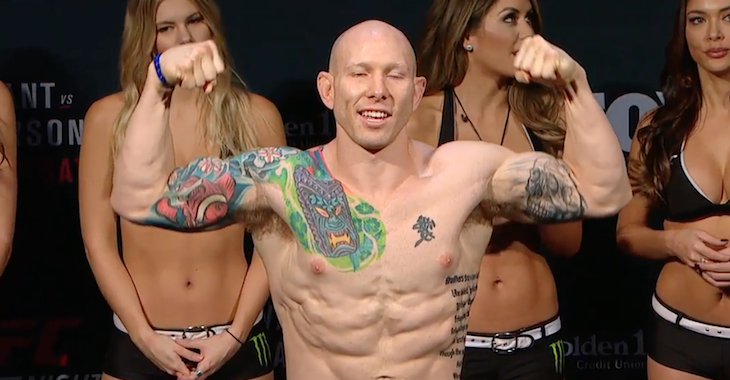 Josh Emmett says a fight with Brian Ortega “needs to happen”, weighs in on Edgar vs. Holloway.

UFC featherweight contender Josh Emmett is coming off one of the most sensational knockouts of 2017 at last month’s UFC on FOX 26 event in Winnipeg. The jaw-dropping win boosted Emmett’s professional mixed martial arts record to an impressive 13-1, with four of those victories coming under the UFC banner.

According to Emmett, the UFC wanted him to square off with fellow division contender Brian Ortega in the main event of Februarys UFC on FOX 28 event in Orlando.

Emmett recently joined host Kinch on BJ Penn Radio to discuss the whole scenario, while explaining why a future scrap with Ortega needs to happen.

“I’m just a little frustrated, but hopefully… For whatever reason, he )Ortega) doesn’t wanna fight me. Hopefully they can schedule it little later on down the line, ’cause I think that’s the fight that needs to happen. Everyone, all the fans have been talking about it and it would be a great fight as well.”

“They’ve been going through 4 or 5 opponents in order for me to get a fight. I didn’t even know you can turn down fights, and I didn’t know that until I got in it and then all these guys were turning fights down against me. Me personally, I’ve never said no to a fight and Shelby and Joe Silva know that. They already know, so they asked me and I say, ‘Yes,’ and then they go and ask them and they all say no. I’m like, ‘Stop asking me first. You already know what my answer’s gonna be.'”

While Emmett is unsure what will come next, he is basically ready for anybody the UFC wants to throw his way.

“I’m up for whatever. I’m back in the gym so I’m getting my weight down. I’m in good shape. I’m gonna get back into fight shape here, soon and then … Great, whatever the UFC wants.”

“Man, it’s a tough fight. For me it’s kind of like a coin flip. It’s a … Holloway’s been doing great. He’s such a elusive fighter. He can mix it up, go southpaw, orthodox, throws a lot of tricky things. But Edgar, man. He’s a legend of the sport. He’s like a true pioneer and if he can come out and mix up his great boxing and his takedowns… That’s one thing with Edgar. He won’t fade. He can go at such a high pace for five rounds so I think if he can get Holloway down on the ground and put him on his back. I know Holloway has good jiu-jitsu but I think maybe Edgar’s pressure might be too much and … I don’t know. I’m excited to watch the fight, just as a fan. I grew up watching Edgar and I’m still a fan of a lot of these guys so I’m excited for that fight. But it really just depends how it goes. If Edgar can get him down, I see him pulling off the win, but if Holloway’s stuffing the take-downs or using his submissions for sweeps, I see it going Holloway’s way.”

Who would you like to see Josh Emmett fight next? Sound off PENN Nation!