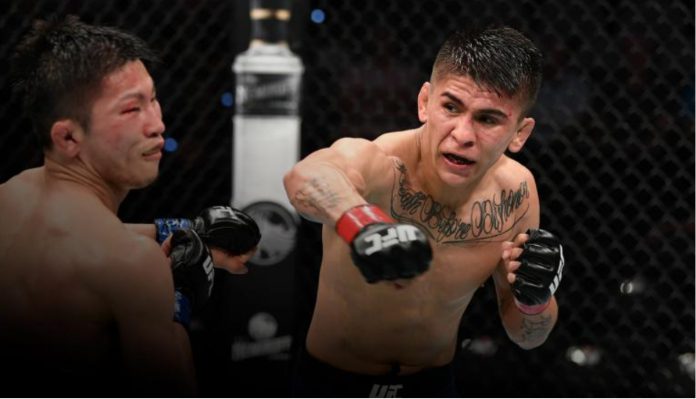 Mario Bautista was hoping to fight around this date.

Bautista was in training camp helping Sean O’Malley prepare for his UFC 276 fight on July 2 against Pedro Munhoz. During the camp, he got the call to fight Brian Kelleher at UFC Vegas 57 on just three weeks’ notice and jumped at the chance as he feels he’s in good condition.

Although preparing for an opponent on less than a month’s notice is less than ideal, Bautista was actually happy with it. He says he is well aware of who Brian Kelleher is and believes he fights very similar to his past opponents which is a big benefit to him.

“I’ve seen him fight, he’s been around for a while, I’ve seen him fight plenty of times,” Bautista explained. “I have fought similar people to him, like Miles Johns, Jin Soo Son, and even Jay Perrin the last guy that I fought, kind of similar styles… I just have to be super sharp in the first round. It might be a close first round but I know if the fight goes into two and three, I feel like those are always my rounds. I’m going to be there until the end, I really like the matchup. I’m ready for it and ready to go.”

Given that Mario Bautista believes Brian Kelleher has a similar style to three of his past opponents, he is confident he will be able to figure him out quickly. With that, he thinks it will either be a quick finish or a grinding type of fight but one he takes over in the later rounds.

“It’s either going to be a quick night or a pretty long one, I feel like. He likes to start the fight right away and I’m getting prepared for that,” Bautista said. “If nothing happens in the first round, I know I can take over two and three and win the fight for sure.”

If Bautista goes out and finishes Kelleher as he wants too, he thinks he could be one win away from a title shot but does want at least one more fight this year.

“It depends on if I finish or how I do it. Not looking past Brian but I think one or two more fights and I’m in the top-15,” Bautista concluded.

Do you think Mario Bautista will finish Brian Kelleher at UFC Vegas 57?