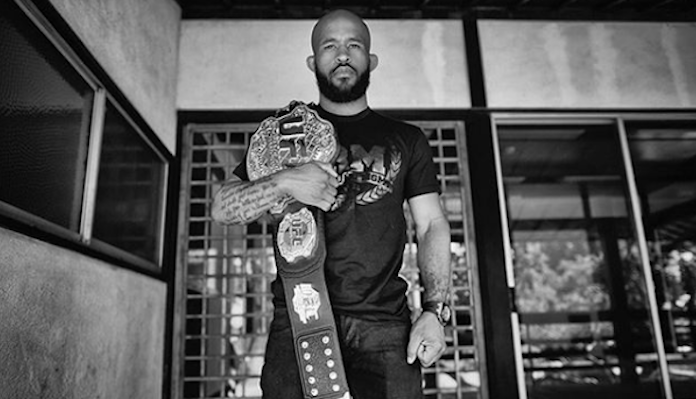 On Monday’s edition of The MMA Hour, UFC flyweight champion Demetrious Johnson explained that he’s still interested in defending his title against slimmed down version of UFC bantamweight TJ Dillashaw.

To remind: the UFC has now had multiple two-division champions in Conor McGregor, Georges St-Pierre, Randy Couture, and our own BJ Penn. Singapore’s ONE Championship also has two two-division champions at present in Aung La N Sang, who owns the middleweight and light heavyweight straps, and Martin Nguyen, who wears gold at lightweight and featherweight (and possibly bantamweight in the near future).

“Let me be freakin’ honest,” Johnson said. “If I went up there and beat TJ Dillashaw at 135 pounds, I have no interest whatsoever in staying at 135. People are like ‘why not?’ I have no interest in fighting guys who walk around at 160 pounds. I literally have interest. It puts more wear and tear on your body, it’s going to do X, Y and Z. I’m looking for the longevity of my career. I want to fight for another five to six years, whether I win or lose, and I’m going to be able to do that fighting guys who are my size.”

“So if [Dillashaw] wants to make the weight cut, be the Champ-Champ, all that old jazz… I don’t care about being Champ-Champ,” Dillashaw continued. “I’d rather be the only, 12-time consecutive defending champion in any mixed martial arts promotion. You look at ONE FC, they’ve got double Champ-Champs.”

“There’s multiple Champ-Champs out in the world. Don’t be surprised if Bellator has a Champ-Champ [soon]… The Champ-Champ is old news nowadays. But you know what’s brand new news? 11-time defending champion. That’s brand-fucking-new news.”

Hard to argue with Demetrious Johnson’s logic on this one!