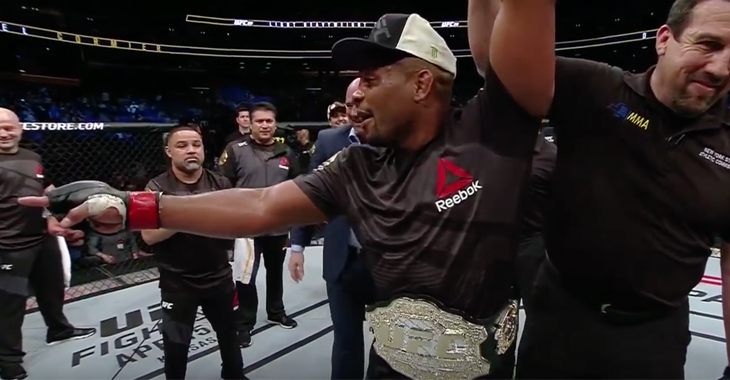 There is a UFC card in Missouri this Sunday, but the big UFC kick-off to 2018 is just a week away now. UFC 220 goes down in Boston with Stipe Miocic and Daniel Cormier both defending their titles against young hard-hitting hype machines. As we get closer to the event, tensions get higher and there’s bound to be some verbal jabs before the physical ones. Volkan Oezdemir went straight from a poke to an all-out haymaker to try and get underneath Cormier’s skin, but the UFC light heavyweight champion turned it right back on him.

Savage post @volkan_oezdemir but since no one knows or follows you I’ll send it out to the public. 3000 likes for such a good post seems like a waste. quick point tho you’re no Jon Jones and I’m no jimmy Manuwa. And I’m a lot better than Kelly Amunson #tapmachine #bum #ufc220 pic.twitter.com/pvGpoHLE2F

“Savage post Volkan Oezdemir, but since no one knows or follows you I’ll send it out to the public. 3000 likes for such a good post seems like a waste. Quick point though: You’re no Jon Jones and I’m no Jimmy Manuwa. And I’m a lot better than Kelly Amunson. Tap Machine. Bum.” – Daniel Cormier via his Twitter.

This all started with Oezdemir posted the photo series to his Instagram account, comparing his knockout to when Jon Jones finished Daniel Cormier at UFC 214. Not only did Cormier counter the mental Venn diagram Oezdemir tried to create, but hit him with a multi-tiered attack covering his popularity and drawing power. For a fight that’s been relatively quiet on the trash talk front, that escalated quickly. Both of them don’t have to wait long until they can let the best man win in the Octagon, but that probably won’t stop them from going back and forth a couple of more times before Saturday, January 20th.