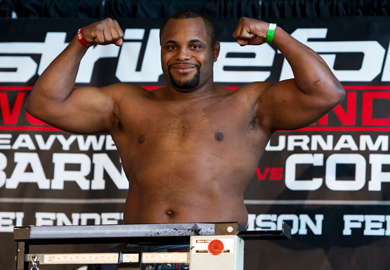 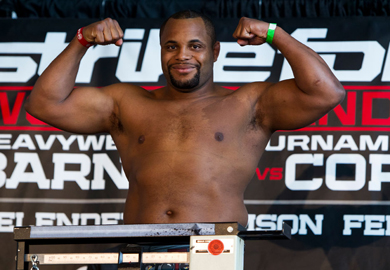 Is Jon Jones the best fighter in Mixed Martial Arts today? Daniel Cormier seems to think so, stating that his performance at UFC 152 proved just that.

Jones survived an early first round scare from challenger Vitor Belfort this past Saturday night in Toronto. The “Phenom” locked in an elbow-popping armbar on Jones, that had the light heavyweight champion cringing in discomfort. Jones was able to fight through the submission attempt and ended up winning the contest via a fourth round submission of his own.

According to Cormier, the performance proved that not only is “Bones” the best fighter in the world, but that he won’t be giving up his 205-pound title easily, as the former Olympic wrestler told Bloody Elbow:

“There are questions about everybody. Take me, for example. People wonder how will I hold up in a longer, 5 round fight. Hopefully I answered that in the fight with Josh Barnett. With Jon, we all wondered how he would deal with adversity. He cruises through so many fights. How will he do when things don’t go just right for him? Well, on Saturday night, he got dealt about as bad adversity as it could have gotten, and he got through it. I thought he fought well. I think what that shows, is that Jon Jones is not only a great fighter, he’s a guy that loves being a UFC champion and everything that comes along with being the UFC champion. The fame, the money, and everything else around it. The aura of being the best fighter in the world … he really does love it. He lives for it, and it’s not going to be easy to take that from him. He’s willing to go through the fire in order to stay in that place. He’s said in his interviews that he wanted to be the greatest fighter of all time, and people doubted his sincerity. Saturday, he showed that he meant what he said. He wants to be the best of all time, and he’s willing to do what it takes to ensure that.”

The Strikeforce Heavyweight Grand Prix winner, Cormier, also stated that if someone wants to dethrone the young phenom, they will have to go to a place very few are willing to go. Should a bout ever come to fruition between Jones and Cormier, Daniel will be willing to do just that.

“I would love all that stuff too. I would love to be called the best fighter in the world, and have everything else that comes along with being the UFC champion. I thought Saturday night was very telling, and it’s going to be difficult to get that belt away from him. It’s going to have to be somebody that’s in the right frame of mind, that’s willing to go through the fire with him. I know for a fact that I’m willing to go there. I’m willing to be involved in a dirty fight where we’re both bloodied and can hardly stand up. You have to be willing to go to a place with Jon Jones that I don’t know if many people are willing to go. I think Jon is the best fighter in the world, pound for pound. Not just at 205. In all the weight classes, he’s the best.”

Cormier is still waiting to see who his final opponent under the Strikeforce banner will be, but a future UFC bout with Jon Jones is something he is very interested in.

Is this a match-up you would like to see? Do you agree with “DC”, has Jones stripped “the greatest fighter in the world” title from “The Spider”?