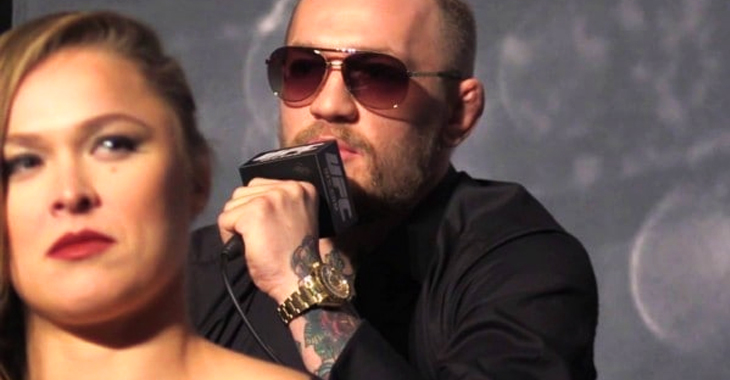 Last year, Conor McGregor lit two worlds on fire with his multi-multi-million dollar crossover boxing match with Floyd Mayweather. He sailed the seven seas in yachts and set up multiple business ventures, but now he’s slowly but surely entering back into the public eye and hopefully the world of combat sports. This year, it’s Ronda Rousey who is on fire as she finally debuted as the newest WWE superstar. After being asked about the deal, the UFC’s ‘champ champ’ offered up words of praise, respect and congratulations to one gigantic superstar to another.

“I’m delighted for [Ronda Rousey]. Absolutely over the moon for her. She looked like she really enjoyed herself at the event and I was very, very happy to see her. She’s a pioneer for the game and she’s came through it all and faced big wins and big, big losses and she came through it. It’s great to see her represent herself and mixed martial arts and have fun in the WWE. I know she’s been a big fan of it all her life. So, it’s great to see that.” — Conor McGregor speaking to Adam Glyn.

Ronda Rousey was speechless after her big WWE welcome. pic.twitter.com/upl5ZDtEge

Unless you’ve been living under a rock for the past couple of years, this jump for Ronda Rousey has been a long time in the making. She appeared in the crowd and later in vignettes, people were even trying to capture pictures of her dinners with Triple H. Now it has finally happened and all signs (and Rousey fingers) point to Wrestlemania, which goes down on Sunday, April 8th. The pay-per-view is already destined to be huge, but the addition of Ronda Rousey as well as a potential appearance by former UFC heavyweight champion Brock Lesnar could send this card into the stratosphere.