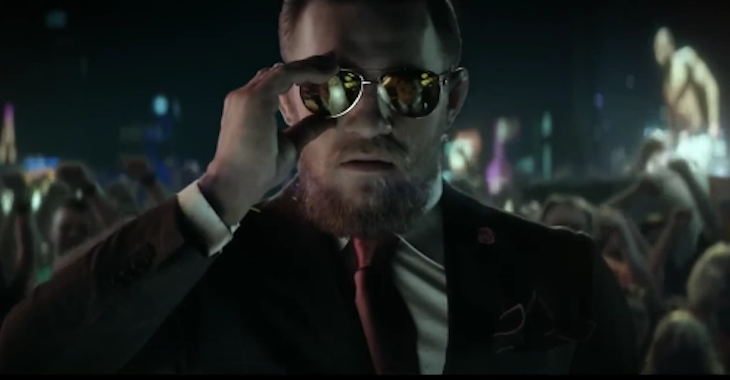 It happens every fight. We all have done it. He’s too fast, we say. The ground game will be his downfall. This guy will finally be the guy who beats Conor McGregor, the media writes. It’s happened through Dustin Poirier, Chad Mendes, Jose Aldo, Eddie Alvarez, and now Floyd Mayweather. This is different though, this isn’t MMA. It’s a boxing match against Floyd Mayweather. While McGregor has enjoyed being a giant fish in a very small pond, he’s been released into the Atlantic Ocean now. It’s very hard to see how McGregor can pull this one off, but nothing has dented his confidence. That’s why we’ve compiled some brief footage (against better judgment) to show three methods where this cocky Irishman can prove us wrong one more time.

Throwback to this day last year and the Notorious one getting his revenge… 👊 pic.twitter.com/0EvhfH9Poi

Conor McGregor has rocketed that straight left on just about everyone he’s fought, and none of them have liked it at all. He even snapped Paul Malignaggi’s head back in sparring in a clip that sent the internet into pandemonium. If Floyd Mayweather leaves his hand out a little long, or underestimates McGregor, he could taste McGregor’s power. Sure, it’s not a 4oz MMA glove, but chances are it’s still going to be powerful. Would it be enough to put Mayweather away? We’ll just have to wait and see, he has to land the punch first.

The Blitz Off the Right

And here’s another example. Look at Manny’s subtle lead foot outside correction. Sometimes though it’s not needed – FM steps inside himself. pic.twitter.com/PWHo1NtR3v

McGregor is too good 😳 pic.twitter.com/laWl14cJlv

We’ve all seen this combo. The legend Ray Rod even turned Conor McGregor super saiyan as he was pelting Eddie Alvarez with shots until he fell. Now, McGregor is no Manny Pacquiao, but the sequence and set-up look nearly identical. If you believe in McGregor mythical power, even in heavier gloves, then all he’d beed to do is get inside and land these four shots. That’s a big task to get a big belt. Like, with diamonds and sapphires on an alligator’s back.

And if Conor really wants to make it dirty he can take a page from Jones book when/if FM underhooks him (look at DC’s right underhook). pic.twitter.com/B95jm6maXb “This technique is designed to rupture the major collateral ligaments in the elbow joint. It is powerful enough to cause an avulsion fracture. Luckily for FM he does not have to worry about this next Saturday. Or does he?” — Coach Kavanagh on Instagram.

This last one is probably the biggest long shot of them all, but was hinted at by Conor McGregor’s coach himself. He showed the picture of it happening on the ground, but that would reveal the secret if he did it standing up. The footage of Jon Jones and Shinya Aoki demonstrate what Kavanagh was really getting at. If Conor really wants this win, he’s going to have to get dirty. That is, as dirty as he can be within the rules. Breaking Mayweather’s arm is not within the rules, but if it looks like it wasn’t intentional, then it’s fair game. This arm lock can happen super fast in the midst of a clinch and can cause some serious damage, we’re talking fight ending damage.