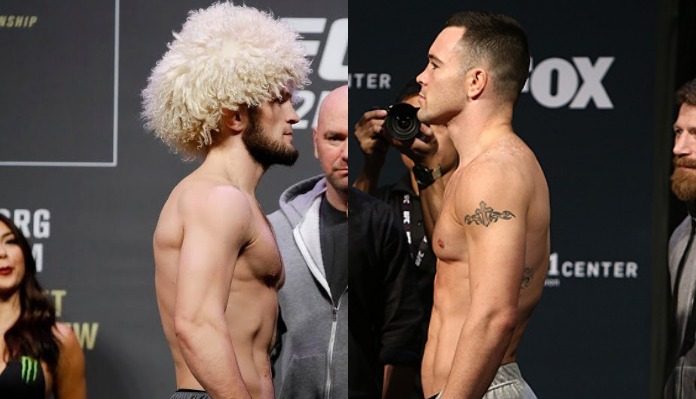 Khabib Nurmagomedov, who now owns the UFC lightweight title, is a flawless 26-0 as a professional mixed martial artist. Given his incredible dominance in the lightweight division — and the fact that he’s struggled with the scale in the past — many members of the MMA community have wondered how he’d perform in the UFC welterweight division.

“I think [Nurmagomedov’s skill] works for the little lightweight division, but that shit doesn’t fly at welterweight,” Covington told MMAjunkie Radio this week. “You’ve got a real All-American wrestler, not some sambo dude, so if he comes up to welterweight, he’s going to get his head dunked and balls put on his forehead just like the rest of them.”

Needless to say, Covington is not too impressed with Nurmagomedov — particularly after the Russian failed to finish part-time real estate agent Al Iaquinta in the last-minute main event of UFC 223.

“Guys have a lot more to worry about when they’re fighting me than they do fighting Khabib. He’s just one-dimensional. I’m the most well-rounded fighter on the planet.”

What do you think of Colby Covington’s assessment of Khabib Nurmagomedov’s chances in the welterweight division?