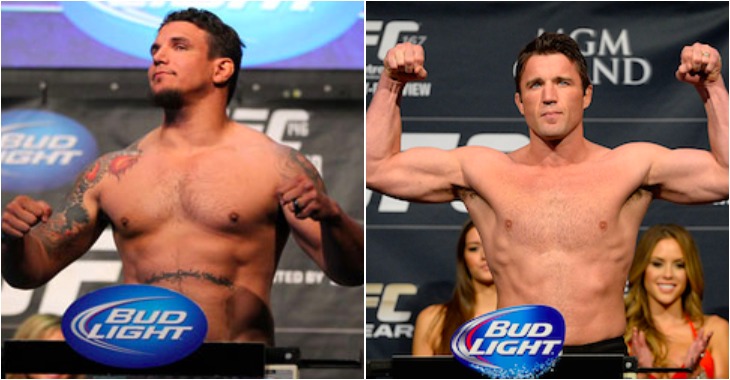 Though Chael Sonnen is currently spearheading his own submission grappling league in Submission Underground (SUG), he is also staying busy on the competitive grappling circuit through his involvement in other promotions.

This September, for example, he was supposed to compete under the Abu Dhabi Combat Club (ADCC) banner, where he was expected to battle American Top Team coach Ricardo Liborio. Unfortunately, Liborio was forced to withdraw from this competition. The good news is that he’s been replaced by an even more recognizable member of the MMA community. Sonnen will now lock horns with former UFC heavyweight champion and decorated BJJ black belt Frank Mir.

This news comes from ADCombat.com.

Before Sonnen meets Mir on the mats, he will take on his arch rival Wanderlei Silva in the main event of Bellator’s upcoming Bellator NYC pay-per-view. This bout will mark his opportunity to rebound from a disappointing return to action back in January, when he succumbed to a first-round submission dealt by the retiring Tito Ortiz. Sonnen is currently 29-15 as a pro mixed martial artist.

Mir, meanwhile, will be looking to stay active as a martial artist, having recently received a two-year suspension from the United States Anti-Doping Agency (USADA). Shortly after this ban was announced, Mir shared his plans to stay active by competing on the grappling circuit, and perhaps, by fighting overseas, outside the jurisdiction of USADA.

“I’ll keep looking for ways to fight,” he told TMZ sports in the wake of his USADA sentencing. “I’ll figure it out.”

This Chael Sonnen vs. Frank Mir grappling match will go down during the ADCC Worlds, between September 22-24 at the The Espoo Metro Areena in Espoo, Finland. Who do you think comes out on top?