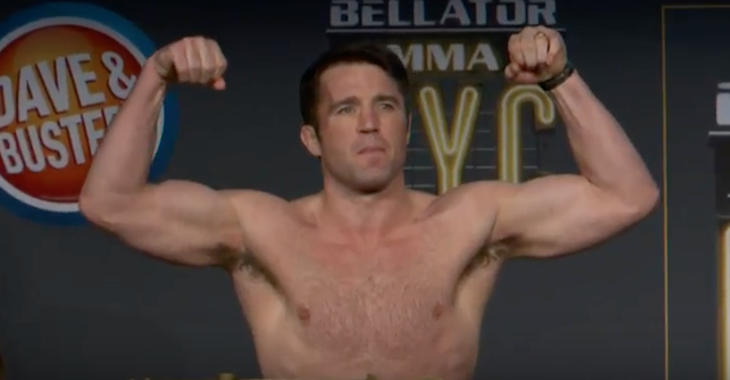 Though he is no longer the UFC superstar he once was, Chael Sonnen has carved out some real success under the Bellator MMA banner. His first fight, of course, was a disappointing loss to the retiring legend Tito Ortiz. In his next fight, however, he rebounded with a dominant decision win over long-time rival and bona fide MMA legend Wanderlei Silva.

From the sounds of it, Sonnen’s habit of battling aging legends is likely to continue. In a recent interview with FloCombat.com, the three-time UFC title challenger suggested that his next fight is likely to pit him against former UFC light heavyweight champion Chuck Liddell.

“I think the most likely opponent is going to end up being Chuck Liddell,” Sonnen said. “We’ll see what happens there, but that’s what I think is going to happen. I think there are actual legs to this Chuck thing. I really do.”

This, of course, is in keeping with a recent statement from Liddell’s coach John Hackleman, who suggested Liddell could make a comeback for the right fight.

It’s also worth noting that Liddell recently had a lunch meeting with Bellator boss Scott Coker. So perhaps there really are “legs to this Chuck thing” as Chael Sonnen suggests.

Do you want to see Chuck Liddell and Chael Sonnen fight?