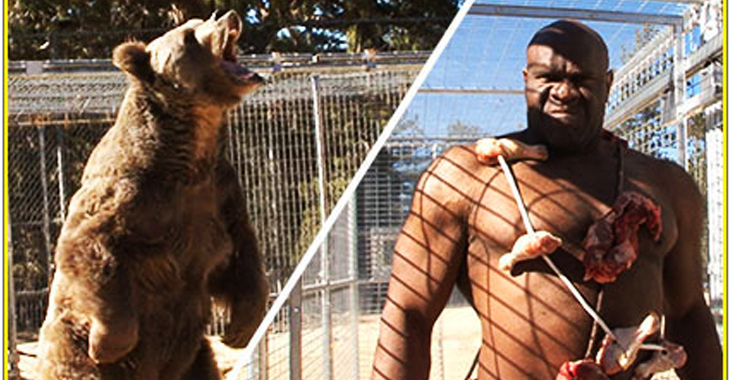 The year 2017 is about to leave us behind and we’re all weary about 2018. Things were so insane this year, what awaits us when the ball drops? Floyd Mayweather already wants to make his UFC debut. Hell, Demetrious Johnson is willing to welcome him. There are two RIZIN cards and UFC 219 all within two days from each other, if that doesn’t make your brain hurt, this sure will. Japanese combat sports and folk hero Bob Sapp may actually be fighting a real live grizzly bear for our entertainment at KYOKUGEN 2017.

Was looking up KYOKUGEN 2017…. and discovered that Bob Sapp is going against a wild bear on NYE in Japan. No details on the competition.

Hey, we don’t believe it either, but there it is in black and white accompanied with a video. This whole event seems absolutely nuts even if you’d take away Bob Sapp taking on a freaking bear. It looks like a pro soccer team is going to play a game against 100 kids, while a baseball player tries to snag a ball from what we assume is one of the fastest servers in Japanese tennis. There is some white water rafting and ice skating of some sort. And of course, Bob Sapp covered in meat and put into a cage with a bear.

KYOKUGEN translates to EXTREME and looks like it may live up to its name, although we’re not really sure what it even is yet. Rest assured, this is something to keep your eye on. You may not be able to watch the airing of the event but someone is bound to be sharing some clips of this bizarre and wild Japanese sports hybrid event. We’ll keep you updated if the internet successfully provides us with footage.