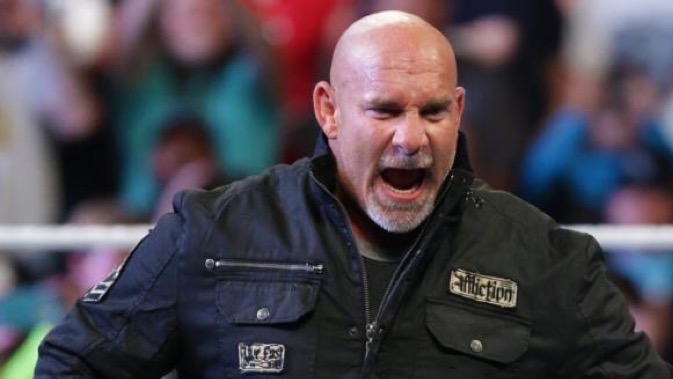 Wrestling icon Bill Goldberg will be making his highly anticipated return back into the ring  and spoke to UFC flyweight Ian “Uncle Creepy” McCall on his podcast on Monday to discuss his pro wrestling comeback.

@Goldberg gives his only in depth interview to Erik and Ian, fresh off his appearance on #WWE Monday Night #RAWhttps://t.co/TfoBC3yaTf pic.twitter.com/HQJUzh3kll

Goldberg, who became involved in MMA as a color commentator while retired from the world of professional wrestling, made a recent appearance on WWE Raw and declared his return to the wrestling ring after a 12-year hiatus.

“I have a very short time frame as it is, I don’t know when it will be (match with Lesnar), but I gotta be ready.”

“I’m still in the gym three times a day, three days a week. I’m trying to gain weight and get back into shape. Get big and strong, and all those things at the same time. But I gotta be in shape, I haven’t been doing it (pro wrestling) in 12 years.”

“I’ve also found out that the skinnier, you are the more stuff hurts. I don’t want to go in there at 230 (pounds), but I don’t want to be too heavy and and slow, either.”

The WCW and WWE legend accepted Paul Heyman’s challenge for a match with former UFC heavyweight champion Brock Lesnar – the same man he defeated over a decade ago in his last match before retiring.

At 49-years-old, Goldberg will be ten years older than Lesnar this time around. Goldberg was a massive fan-favorite and fixture in the late-90’s back in the Monday Night War era, amassing an undefeated streak of 173-0 back in the late 1990’s.

Following his retirement in 2004, Goldberg began getting involved with the world of mixed martial arts, serving as a color commentator for EliteXC from 2006 until it’s closure in 2008. Goldberg also commentated for a K-1 Dynamite USA event in 2007.

When asked at the time whether he ever considered a career in MMA himself, Bill Goldberg said:

“I’d love to, especially if I was 21 or even 29, but these guys are so far ahead of me in terms of experience. I never say never, though. But I don’t see myself stopping my movies, my shows, my commentating, or being a dad to do that.”

Goldberg explained the reason for his return to professional wrestling after a 12-hiatus.

“I got a generation of kids who don’t know who the hell I am except for looking online,” Goldberg told ESPN. “The biggest thing about being a wrestler, and being Goldberg, gave me was the ability to be a superhero to kids.”

How do you think Bill Goldberg would have faired if he began a career in mixed martial arts back in his athletic prime? Were you a fan of Goldberg’s color commentating for EliteXC? Sound off, PENN Nation!