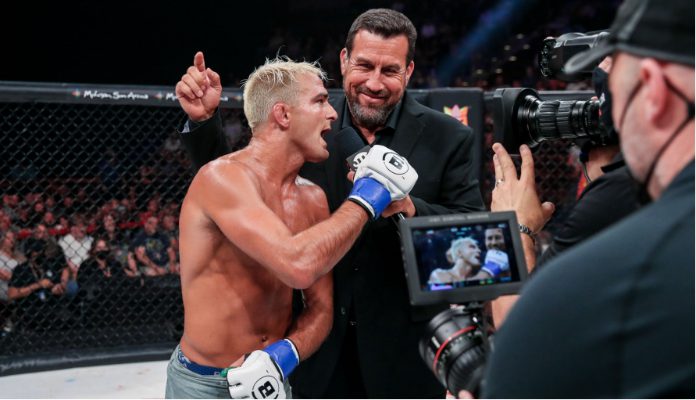 Danny Sabatello is not happy that the Mohegan Tribe Department of Athletic Regulation has fined him $5k for swearing in his post-fight interview.

“I was told if I swore in my post-fight interview, I might get fined,” Sabatello said. “So it’s a good thing I don’t give a f***! I just beat an absolute animal, and not one of you is going to do s***! You want to do something? Come in here right now and do something.”

Now, MMAFighting learned that Sabatello indeed was fined for swearing. MTDAR President Mike Mazzulli cited Rule 21 of the MMA Unified Rules, which prohibits “use of abusive language in the fighting area.” Sabatello may appeal the decision, Mike Mazzulli added.

“I said just be respectful of the sport, that’s all I ask, and don’t push,” Mazzulli said about Sabatello. “You heard him standing there saying, ‘I’m going to get fined, but I don’t care.’ So he got fined.”

Danny Sabatello was then informed of the fine in a live interview on The MMA Hour where he did not hold back on his thoughts. He believes getting fined for that is f******g bulls**t. Yet, the fine won’t stop him from being who he is and he plans on still swearing in his next post-fight interview.

Sabatello improved to 13-1 with the win over Leandro Higo at Bellator 282. He is now 3-0 in Bellator with wins over Jornel Lugo and Brett Johns. He also beat Taylor Moore by decision on the Contender Series in 2020 but did not get a contract from the UFC. Sabatello is now set to fight Raufeon Stots for the interim bantamweight title his next time out.

What do you make of Danny Sabatello being fined $5k for swearing in his post-fight interview?