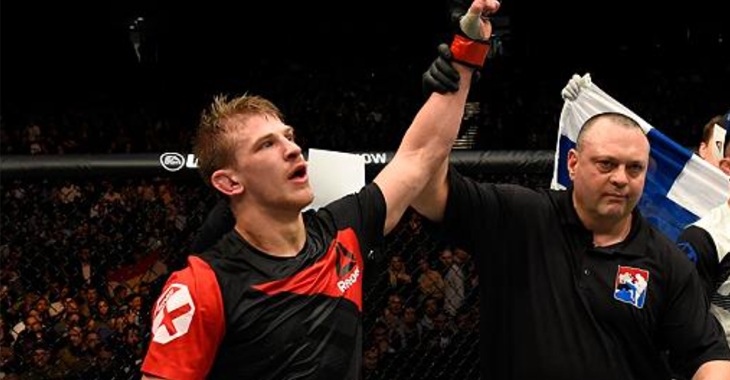 Arnold Allen has responded to Israel Adesanya’s comments about his fight with Dan Hooker.

The two featherweights squared off at UFC London in the co-main event. Allen dominated the contest and stopped Hooker in the first round with a flurry of punches. Despite the seeming finality of the bout, ‘The Hangman’s teammate Israel Adesanya disagreed with the stoppage.

The UFC middleweight champion voiced his displeasure with the stoppage, believing it was too early. However, Arnold Allen doesn’t seem keen on that sort of talk and has responded to Adesanya’s comments.

The UFC featherweight contender responded on The MMA Hour with Ariel Helwani. Allen didn’t really understand Adesanya’s complaint, seeing as how Hooker himself didn’t complain. With that in mind, he seems to think that the stoppage was the right call.

“I think it was the right call. I can’t really see how Izzy can think that was early. The man himself didn’t complain, so that’s the biggest tell for me. All that’s gonna happen in that position, where he’s sort of curled up, is more shots landed, so I don’t know what’s Izzy’s thinking.” (h/t MMAFighting)

While Adesanya may disagree with the final result, Allen picked up the win at UFC London. The victory over Hooker was the biggest of his career, and he’s continued his move up the division. Looking forward, the featherweight aims to return to action later this year.

“Someone was saying June but June’s definitely too soon for me, to be honest. August? This year. Let’s start small. [Laughs]. This year. The weird thing is, obviously I haven’t been the most active, but now being in that top-five talk, those guys tend to fight once-twice a year…. But obviously, I’m gonna fight this year. I’ve got a couple little boo-boos on my hand but it shouldn’t be as bad as last time, hopefully.”

What do you think of Arnold Allen’s comments? Did you think his stoppage win was premature?
This article appeared first on BJPENN.COM