In a recent interview with the “Pardon My Take” podcast, Tyson stated that that the Irish MMA star is “going to get killed” when he squares off with the undefeated boxing legend Floyd Mayweather in Sin City.

“McGregor is going to get killed boxing!” Tyson stated. “I got mad because I thought they were going to use MMA rules against boxing because that’s what it’s all about: Can the boxer beat the MMA guy? McConor put his dumbass in a position where he’s gonna get knocked out because this guy (Floyd) has been doing this (boxing) all his life since he was a baby. McConor can’t kick and grab and stuff so he won’t stand much of a chance.”

“McGregor took the biggest sucker rules in the history of boxing!” 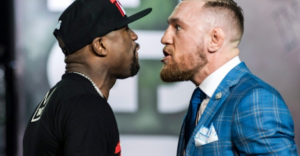 Tyson would later go on to say that if he was going to fight Conor McGregor, he would have allowed “Mystic Mac” to at least kick and use his knees.

The former WBA, WBC and IBF heavyweight champion of the world, Tyson, retired from the sport of boxing after suffering a TKO loss to Kevin McBride in June of 2005.