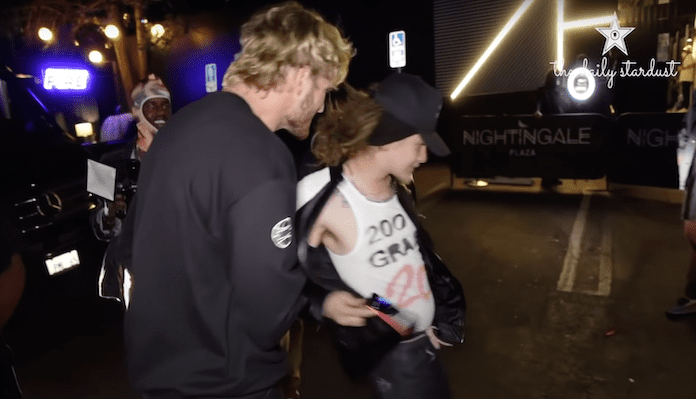 YouTuber-turned-boxer Logan Paul slapped an autograph seeker who called him a “p*ssy” ahead of next year’s Mike Tyson boxing match.

Paul was signing autographs and talking to several fans outside of a nightclub in Los Angeles on Wednesday night. Not long after, one of the fans called him a “p*ssy” and Paul was not happy about it. He walked over to the fan, slapped him, and told him to scram. Security then came in and broke things up before anything more serious happened. It appears as though this incident was alcohol-fueled, and you can watch it below.

Since no one was seriously injured during this incident, it seems unlikely that any sort of charges will be placed on Paul even though he did put his hands on the individual. However, the fan who was talking smack probably should have thought better than to have talked crap to a professional athlete. Although Paul might not get the respect he should from fans, he is still someone who has stepped into the ring multiple times against guys like Floyd Mayweather, so he is most certainly far from a “p*ssy” as this fan suggested he is.

As for Paul, he is currently preparing for his fight against Tyson in the boxing ring in early 2022. Paul fought Mayweather to a draw back in June while Tyson fought Roy Jones Jr. to a draw last year, and with both men being big names, they both wanted the fight. Most people expect Tyson to go in there and knock Paul out, but he did show against Mayweather that he is durable, so it might turn out to be harder to finish him than initially though, although Tyson certainly has the KO power to knock anyone out.

How do you think Logan Paul will fare in his boxing match against Mike Tyson?