Jake Paul received an inspirational locker-room speech from his brother Logan to fire him up for his boxing clash against childhood idol Anderson Silva.

‘The problem child’ famously met ‘The Spider’ when he was just a young MMA fan. Having shot to fame on YouTube, Jake Paul has now established a burgeoning reputation in the world of boxing and extended his undefeated record as he scored a unanimous decision over the Brazilian icon at the end of October.

The 5-0 star’s older sibling mapped his journey from the small screen to the squared circle as he dropped some heart-felt brotherly words ahead of the bout.

.@LoganPaul pre-fight speech to @jakepaul was a mic-drop 🔥🔥🔥 pic.twitter.com/HpKjEkMxsl

“You’ve always been my little brother. But it doesn’t feel like that anymore. From making silly home videos before YouTube even existed, to changing the entire landscape of combat sports. You make it incredibly easy to be a proud brother, and one day if I run for president, i’d be honoured to have you as my vice president. Or maybe secretary of defence,” quipped the 27-year-old.

“While this moment is so much bigger than we can imagine, I promise tonight will be just another blip on your radar of life. Another little notch on your belt of accomplishment. Another feat that was impossible on paper. But that you, Jake Paul, made happen,” he continued, before wrapping up by saying, “When you first met Anderson Silva, you were just a child. But tonight, 12 years a and a whole lotta bulls*** later, that child is going to be his biggest fu***** problem. We’ve done all the hard work bro. Go do what you do best.” 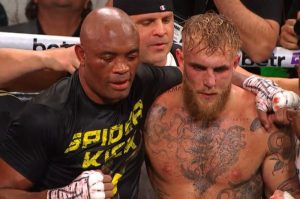 Having overcome a hit list of high-profile stars including former MMA world champions Ben Askren and Tyron Woodley, Jake Paul can expect an even bigger opponent in his next bout. As he continues to outclass seasoned fighters, his stock in the combat sports world continues to rise. Javier Mendez, coach of champions like Khabib Nurmagomedov and Islam Makhachev even suggested that Jake Paul has everything in his arsenal to beat Conor McGregor. Just a couple of years ago, a fight against the Irishman would have seemed fanciful at best. Now, it seems, anything is possible for the former Disney Channel star.

With a host of big-name MMA fighters and boxers having expressed an in fighting Jake Paul, who should the 25-year-old fight next?

This article appeared first on BJPENN.COM
Previous articleConor McGregor expresses interest in purchasing Liverpool FC: “I WOULD LOVE IT! I requested my information on this”
Next articleUFC 281 | Pro fighters make their picks for Israel Adesanya vs. Alex Pereira title fight
© Newspaper WordPress Theme by TagDiv